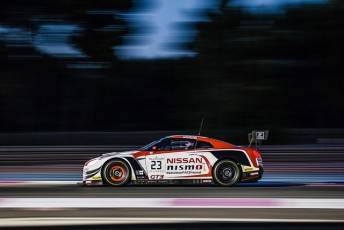 It proved the maiden overall victory in the BES for the #23 GT-R NISMO GT3 which had to overcome a five-place grid penalty.

Starting from seventh, the Nissan had to ward off a late surge by the M-Sport Bentley driven by Guy Smith, Andy Meyrick and Steven Kane.

In the closing minutes, Kane looked like challenging for the lead before his spin and brush with the barriers put paid to the challenge before ending up second.

The Bentley took the flag just under eight seconds away with the Marc VDS BMW Z4, driven by Lucas Luhr, Markus Palttala in third.

The Kessel Racing Ferrari of Michael Lyons, took the Pro-Am honours with the machine shared by Michael Broniszewski and Alessandro Bonacini finishing just under 1:40s off the lead.

The #22 Nissan GT-R NISMO GT3 was running second in the Pro-Am class for much of the race at the hands of Mark Shulzhitskiy, Gaetan Paletou and Ricardo Sanchez.

However a gear selection issue in the final hour thwarted their solid run with a long pit stop seeing them tumble down the order to finish 12th in class. 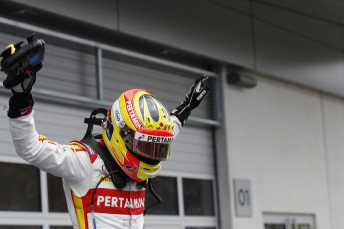 Haryanto had to contend with a broken front wing for the second half of the race before going on to beat Vandoorne and Nobuharu Matsushita.

In a closely run affair Sergey Sirotkin was fourth with just 1.3s separating the top four.

His Russian time team-mate Artem Markelov was stripped of his eighth place finish after it was found that he did not have enough fuel remaining for a mandatory post-race sample.

Vandoorne now leads the title fight on 155 points from Alex Rossi (78) with Haryanto moving to third on 70. 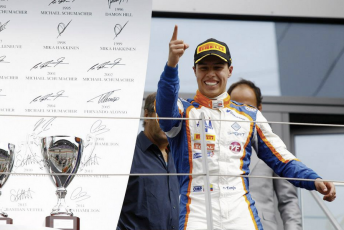 Luca Ghiotto realised his breakthrough victory in the series for Trident, completing the job in the feature race after claiming pole position.

A Safety Car was called moments after the start after Mitch Gilbert stalled before he was hit by Kevin Ceccon.

The collision saw Samin Gomez also involved with all three drivers eliminated from the race.

In the second heat, Oscar Tunjo became a first-time GP3 winner after charging from ninth on the grid.

The podium was revised after Ocon, third across the line, was excluded after a post-race check of his ART Grand Prix machine revealed that his undertray had breached the regulations. 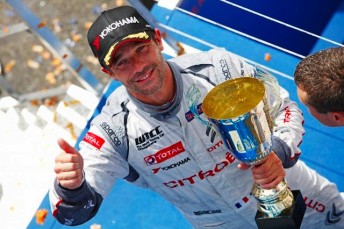 Yvan Muller led a Citroen trifecta by claiming victory from pole position in the opening race at the Slovakia Ring.

Muller had almost 2s to spare at the end of the 11-lap race from Jose Maria Lopez with Sebastien Loeb finishing third ahead of Lada driver Rob Huff.

The same Citroen trio occupied the podium in the second 11-lapper with Loeb claiming victory ahead of Lopez and Muller.

Lopez takes a 30-point lead over Muller at the halfway point in the season. 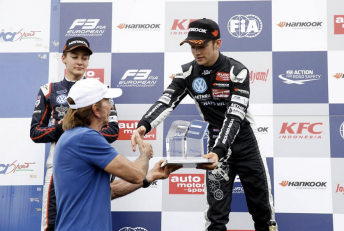 Charles Leclerc being handed the trophy from the great Emerson Fittipaldi

Prema Powerteam driver Jake Dennis took two wins at Spa as the series came under fire for the second meeting running at Spa.

Dennis headed Santino Ferrucci and Sergio Sette Camara in the second race which saw a return of the wild driving which marred the Monza round.

Lance Stroll was banned from the final heat, which was taken out by Dennis, following his role in an accident in the middle race that took out Mikkel Jensen and Felix Rosenqvist.

Jensen and Stroll were involved in the high flying shunt at Monza.

The opening 16-lap heat at Spa was taken out by Charles Leclerc who moves to 217.5 points in the standings to lead Dennis (189) with Rosenqvist third on 188.

The series moves to the Norisring for another three-race format next weekend. 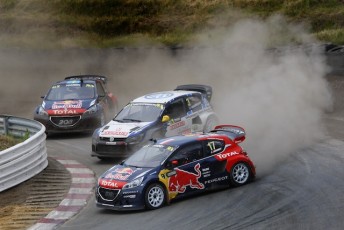 Davy Jeanney has become the first Frenchman to win a World Rallycross round after taking out the German round.

Jeanney managed to take the honours in round five of the championship despite a crash in his Peugeot 208 RX Supercar.

Petter Solberg consolidated his points lead after finishing second ahead of Timmy Hansen who made it a double podium for the Team Peugeot-Hansen outfit.

“To win today feels incredible, it’s been the perfect weekend for me and it’s really fantastic for the team to have Timmy on the podium too,” Jeanney said.

The FIA World Rallycross Championship will prepare for the next round in Sweden at the Holjes round from July 3-5. 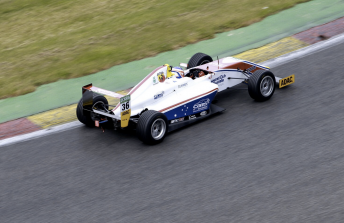 Australian teenager Joey Mawson secured another podium finish in the 2015 German Formula 4 Championship at the Spa-Francorchamps.

The CAMS Foundation-backed driver finished runner-up in the final 30-minute race of the weekend to elevate himself into second place in the championship standings.

Mawson started the race from sixth place, courtesy of a fifth placing in the opening race of the weekend, before being forced wide in turn one and dropping to seventh.

He then clawed his way up the order and following a spirited battle with championship leader Joel Eriksson for third, the Sydney-sider set his sights on the race leader Lando Norris.

After closing in on Norris, Mawson was poised to make a challenge for the lead before the Safety Car was deployed for an incident further back in the 36 car field which ended the race early.

Mawson’s podium finish came after a seventh place finish in a rain-soaked race two and fifth in the opening encounter of the weekend.

The Championship will now head to Lausitzring for round four in two weeks time. 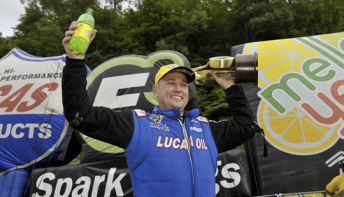 It was the first time the Aussie had come from the second half of qualifying (qualified 11th) to win, accounting for a number of big names in the process.

In the opening round, he defeated Antron Brown, then went on to take out former champions Shawn Langdon and Doug Kalitta.

On six occasions Dixon has won on Father’s Day in America, but this time the Australian took the spotlight with a flawless display in the final.

It was his third win of the season.