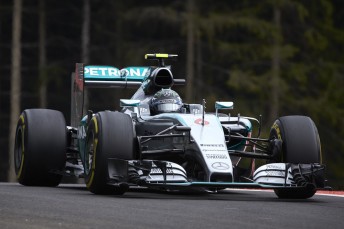 The Mercedes driver hooked up a perfect start to beat his pole sitting team-mate Lewis Hamilton to Turn 1 which gave the German the platform for his third win of the season at the Red Bull Ring.

Hamilton was forced to settle for second while Williams’ Felipe Massa scored his maiden podium in third.

Rosberg faced a stern challenge from Hamilton on the opening lap before the race was neutralised by the Safety Car for a nasty crash, involving Ferrari’s Kimi Raikkonen and McLaren’s Fernando Alonso.

Once racing resumed, Rosberg began to stretch an advantage which Hamilton was unable to close.

The race was ultimately decided when Hamilton’s charge was quelled after receiving a five second time penalty for crossing the pit lane exit line following his only pit stop.

Rosberg controlled the remainder of the race to score a relatively easy victory from his opposite number, although the German was concerned by a vibration in the final laps.

Ferrari’s Sebastian Vettel was on course to claim the final spot on the podium having spent the majority of the race in a lonely third unable to challenge the Mercedes duo.

However, a lengthy pit stop due to a sticking right rear wheel saw the four-time world champion gift the podium spot to the Williams of Massa.

Vettel pushed Massa hard in the closing stages of the race but the Brazilian just managed to hang for his first rostrum of the year.

Williams increased its points haul with Valtteri Bottas coming home in fifth who fought back from a sluggish start to the race.

Daniel Ricciardo delivered an impressive drive to claim the final point in 10th having been forced to start from 18th and serve a five second time penalty in the pits.

The Australian managed to clock 50 laps on the soft tyres before a late switch to super soft rubber which prompted his late charge into the points.

It proved to be a weekend to forget for Raikkonen and Alonso, which came to an abrupt end on the opening lap when the pair collided on the run to Turn 3.

The McLaren and Ferrari locked together which resulted in the pair hitting the barrier with Alonso launching over the cockpit of the Finn.

Both drivers escaped unscathed but it ruined Raikkonen’s hopes of charging from the back to claim points, while it extended Alonso’s run of consecutive retirements to four.

The incident was investigated by the stewards who decided to take no further action.