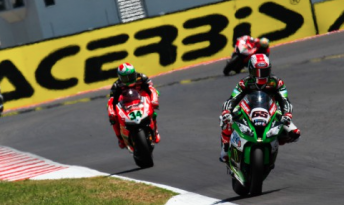 Jonathan Rea continued his 100 percent podium record with a victory and a second place finish in the World Superbike Championship meeting at Misano.

The Kawasaki rider was beaten for only the fifth time this season in the opening race as team-mate Tom Sykes converted his pole position to a lights-to-flag win.

Although unable to challenge Sykes, Rea was involved in a titanic scrap with Ducati’s Chaz Davies, which was only decided at the final corner of the last lap.

Davies dived under Rea but ran wide in the process which gifted the Northern Irishman second place on the run to the chequered flag.

Davide Giugliano managed to bring the sister Ducati home in fourth after running much of the race in second before he was overhauled by Rea and Davies.

Rea asserted his authority on the second race as the championship leader came through a race long battle with Giugliano to record his 11th race win of the season.

Giugliano took the lead on lap seven but was unable to shake off Rea, who assumed the lead with five laps remaining which he held until the chequered flag.

Rea’s second podium of the weekend equaled Troy Corser’s record of 16 consecutive podiums in a season set in 2005.

Haslam got the better of Davies to record the final place on the podium with Sykes fifth ahead of Biaggi.

Rea’s triumph has seen him open up a 133 point lead over Sykes as the championship heads to Laguna Seca on July 19.