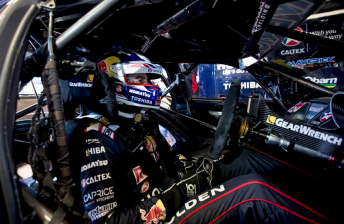 Jamie Whincup’s slide down the points rankings has seen the most dominant driver in the history of the sport struggling to keep in touch.

David Reynolds became the eighth different winner from 15 races this season when he claimed victory in the 70-lap, 200km race at Darwin’s Hidden Valley.

After enduring incidents on the way to 11th and 16th in the Saturday races, Whincup’s woes were compounded by a 25 point penalty for taking out Fabian Coulthard in Turn 1 of the opening heat.

Whincup has now been missing from the top five in each of the last seven races as he and Red Bull struggle to extract consistent speed from their car.

While the uncharacteristic lack of speed must be rectified in order for a fightback to take place, the six-time champion’s position in the points standings is far from dire.

The deficit to Winterbottom currently sits at 286 points after five of 14 championship events.

By comparison, Whincup was 213 behind the leader after five events last year, before going on to win the championship by 583 points.

What do you think? Will Jamie Whincup’s title winning run come to an end this year?