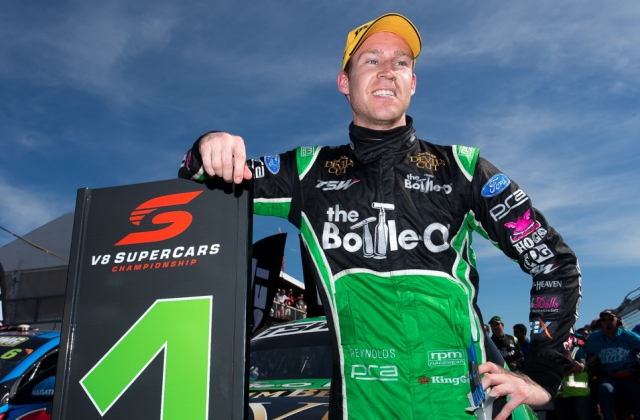 Hidden Valley winner David Reynolds has revealed the extent of recent off-track efforts to improve his form and retain a seat at Prodrive Racing Australia beyond 2015.

Amid ongoing uncertainty over his future, the 29-year-old scored his first win since October, 2013, on Sunday in Darwin.

Reynolds impressively edged away from stablemate Chaz Mostert in the closing stages despite running soft tyres that were 10 laps older than that on the sister Ford.

The win was the culmination of a promising spell for Reynolds that began when The Bottle-O Ford was upgraded to FG X specification in March.

While clearly revelling in the new package, Reynolds says that an unprecedented level of physical and mental work off-track has also contributed to the resurgence.

Speaking openly following his win, the driver said he has been working with renowned sports psychologist Dr Noel Blundell in order to better “maintain a calm, even emotional state” throughout race weekends.

“Over the last couple of years I’ve been very hot and cold and it’s about trying to level out those performances,” Reynolds told Speedcafe.com.

“The work that I’ve done with Noel Blundell, he’s very, very wise and he knows where you need to work.

“A lot of people talk about emotional intensity but no one really knows how to find your zone and your flow state… there’s many different names for it.

“But it’s about trying to find out what works best for me and I think we’re finding it out.

“Even if it’s just a few percent (of improvement), it’s the few percent that I feel I’ve needed.

“When I was going really good in the younger years I had a sports psychologist and when I came to PRA I always wanted one but they said ‘we’ll work with you and look after you’.

“It all got a bit lost in translation and never really happened, so I had to go off my own bat, which I did at the end of last year.

“I know when I get to the track that I’ve done everything I can to prepare myself.”

Reynolds’ determination to save his seat also saw him cut involvement with a Melbourne cafe he co-founded last October, citing it as “too distracting” to his racing.

The driver meanwhile admits that he does not know when Prodrive will make a final call on its 2016 driver line-up as the squad deals with a variety of unknowns.

While the team has stated its desire to remain at four cars, marquee sponsors Pepsi Max and The Bottle-O are both notably out of contract, leaving much to do on the commercial front.

The team also has Dunlop Series standout Cameron Waters waiting in the wings, eager for an opportunity to graduate to the top level.

“It’s a lot of pressure to deal with but I’m trying to make the most of it,” said Reynolds.

“At the start of the year they were just waiting for me to perform and I’m doing that.

“Now we need to use this momentum and stay up the front.”

Reynolds climbed to seventh in the championship standings with Sunday’s win, albeit 240 points adrift of championship leading stablemate Mark Winterbottom.