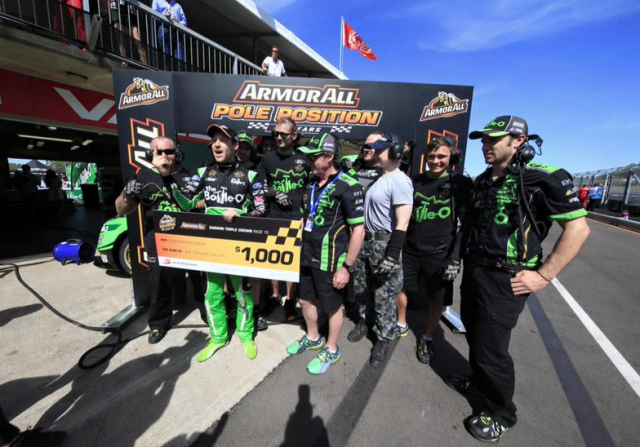 David Reynolds edged Fabian Coulthard to the Armor All Pole Award ahead of Race 15 of the V8 Supercars Championship at Hidden Valley.

Coulthard set a 1:06.38s benchmark at the halfway mark of the 20 minutes that almost went unbeaten.

The Bottle-O Ford driver was the only one to go faster when the entire field re-emerged on new rubber for the final minutes, eclipsing his Holden rival by 0.12s.

“It’s my first pole since 2013 so its awesome for all the team as all four cars are going really well,” beamed Reynolds post-session.

“It’s credit to the guys as the car wasn’t that fast yesterday and they tuned it up overnight.”

Shane van Gisbergen and Chaz Mostert will share the second row, while Dale Wood was the surprise of the session in fifth.

It was a tough session for Red Bull, with Jamie Whincup and Craig Lowndes ending up just 12th and 15th respectively.

An off on his first green tyre lap meanwhile spelt trouble for Scott McLaughlin, who could not better 21st position in the lead Volvo.

Morning practice pace-setter Ash Walsh was even further back in 24th, struggling with understeer in his Mercedes on the hard rubber.