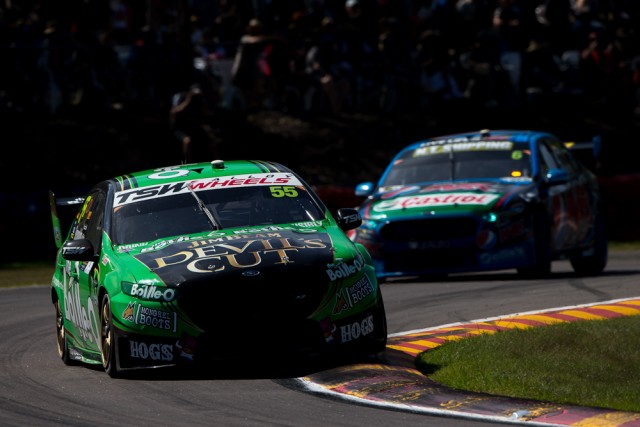 Reynolds celebrates victory by drinking champagne from his race boot

David Reynolds fended off Prodrive stablemate Chaz Mostert to score a long awaited second career victory in the final race of the weekend at Hidden Valley.

Pole-sitter Reynolds lost the lead to fellow front-row starter Fabian Coulthard on the run to the first corner, but found himself back in front when the Holden driver ran wide on lap 12.

Dropping to third, Coulthard would never truly recover from the Turn 5 fumble, going on to fill the final podium spot behind the two Fords.

Typically for a 200km Sunday race with both compounds of tyres in use, the race – which was devoid of Safety Car interruptions – was a strategic battle from the outset.

The bulk of the field ran a soft-hard-soft strategy, although stint lengths varied greatly throughout the field.

The Bottle-O Ford spent just 11 of the 70 laps on the hards in the middle of the race before a puncture led to an early switch back to the softs.

With 25 laps to go the strategies had shaken out with Reynolds leading Mostert, Craig Lowndes and Coulthard.

Reynolds’ advantage was less than a second, however, after an off at Turn 5 that saw the Ford rejoin at Turn 7 and subsequently slow so that the shortcut went without penalty.

The leader proved able to hang on despite his soft tyres being 10 laps older than those on the chasing Mostert and Coulthard cars.

Shane van Gisbergen and Mark Winterbottom ran similar strategies to those ahead on the way to fourth and fifth respectively.

Red Bull went aggressive on set-up with both cars and found the limit of the soft rubber in the process.

Whincup completed his first three stints on his set of softs before a deflating tyre eventually saw a third stop – this time for hards – on lap 46. He finished 22nd

Team-mate Lowndes’ soft-hard-soft strategy meanwhile took a late twist when he pitted with a tyre problem on lap 52, requiring a move back to the hards for the end.

The Saturday hero had been third when he pitted but took the flag just 15th.