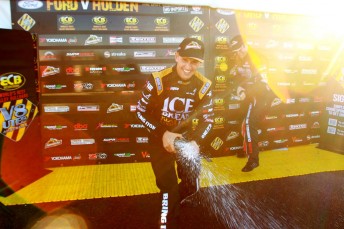 Chris Pither snatched victory from Gerard McLeod after a dramatic drag race to the chequered flag in the V8 Utes Hidden Valley finale.

The 2011 V8 Utes champion scythed his way from sixth on the grid to challenge long time leader McLeod, with the aid of a Safety Car, triggered by Bruce Oaklands and Leigh Nicolaou early in the race.

McLeod had led entire race from pole position before Pither made a last gasp move on the final corner of the last lap.

The pair produced a drag race to the chequered flag with Pither taking the victory by 0.0160s in one of the closest finishes in V8 Utes history.

His second victory of the weekend secured the round win for the 28-year-old Kiwi on his return to the championship.

Jeremy Gray, who started from the front row, claimed the final place on the podium while George Miedecke was fourth ahead of championship leader Ryal Harris.

However, Harris left the meeting with his position under investigation for a move on Adam Marjoram that took the Erebus driver out of third spot on the opening lap.

Although denied victory in Race 3, McLeod scored a breakthrough win in the day’s earlier race to end a three-year winless streak in the category.

“It’s been a long time coming, however we showed great form in Perth, and to come away with a race win, and a competitive Ute has been fair reward for all the effort that has gone in,” said McLeod.

“We are a small team, we really do punch above our weight and todays result hopefully says there’s more to come.”

The championship heads to Townsville for round four with Harris 54 points ahead of Miedecke at the top of the standings.

Quinn starred in the handicap race with victory over Grant Ludbey and Chris Stevenson, while Paul Morris finished fourth having started from the rear of the grid.

Pingel pipped Adam Uebergang to the flag in the final race after a race long battle.