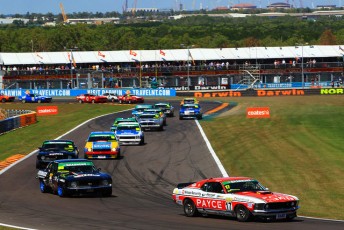 Steven Johnson and John Bowe resumed their private battle in the Touring Car Masters with the pair recording a win apiece at Hidden Valley.

Johnson proved to be the star of the weekend’s second race as the Ford Mustang driver dominated the encounter to record a lights-to-flag victory.

Bowe challenged the Mustang at the start but was forced wide at Turn 1 which allowed Andrew Miedecke and Gavin Bullas through.

Johnson made no mistakes on the restart as he quickly built up a healthy advantage over Miedecke’s Chevrolet Camaro, as Bowe climbed over the back of Bullas.

However, Johnson proved unstoppable as he went on to take the chequered flag for the second time this weekend.

Miedecke finished second with Bowe, who capitalised on a retirement from Pro-Master series leader Bullas, in third.

The final encounter provided a classic fight battle between Johnson and Bowe as the pair diced for the lead throughout the 10 lap contest.

After swapping positions on three occasions, Bowe managed to edge away from Johnson to snatch the victory, with Mideceke completing the podium in third.

“I have to thank my sponsor for this weekend.. John Bowe” joked Johnson, who took the round win with a two victories and a second place finish.

“It’s been a fantastic weekend and really hard work battling with JB and everyone else.

“It’s sensational to come up here every year whether you’re racing or not – but to do it when you are is even better.

“Thanks to everyone who has supported us getting on track in the Mustang this weekend and hopefully we can do some more.”

The championship continues at Queensland Raceway on July 31-August 1.