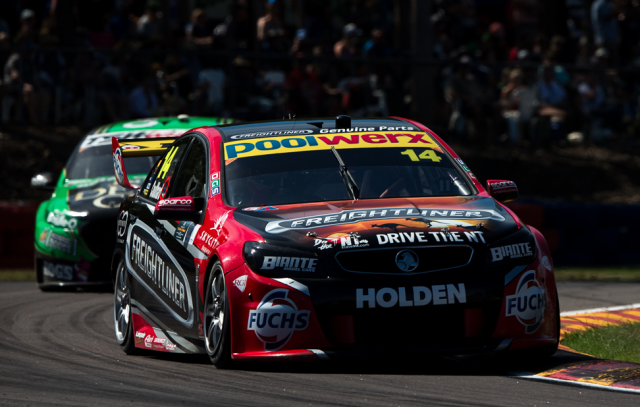 Fabian Coulthard says he regrets not taking a shortcut across the middle of Hidden Valley Raceway during the miscue that cost him the lead of Race 15.

The Brad Jones Racing driver ran wide at Turn 5 on lap 12 as he attempted to lap fellow Kiwi Andre Heimgartner.

Coulthard dropped positions to David Reynolds and Chaz Mostert that he would never recover as he wrestled his Holden back onto the circuit.

Eventual winner Reynolds made an even bigger error at the same corner late in the race when misjudging a pass on Michael Caruso.

The Prodrive Ford, however, skipped across the infield grass and rejoined at Turn 7.

Reynolds slowed to ensure he lost 0.9s to the chasing Mostert on the corresponding lap and subsequently went unpenalised.

“Andre didn’t make it easy, obviously he was going a lap down,” reflected Coulthard of his costly miscue.

“I had to do a bit of a lunge, it wasn’t made very easy for me for someone who was a lap down.

“But in hindsight I should have just done what Dave did and gone straight ahead.

“There was no penalty applied, so that’ll be for the memory bank.”

While Reynolds only narrowly missed the back of Caruso’s Nissan in his own incident, The Bottle-O Ford driver says he wasn’t concerned that he’d thrown away the race.

“I knew if I rejoined and lost a few seconds to Chaz and Fabian I thought they would allow it,” he said.

“It’s just like the Gold Coast, if you cut a chicane and don’t gain an advantage it’s ok.”

Coulthard is confident that he had the car to win the race if not for the off, despite not being able to make his way around either Ford for the duration.

“I feel like any three of us could have won,” he said.

“I had Dave’s measure when I was in front of him and when you’re the following car there’s not a hell of a lot you can do.

“Obviously the amount the cars are on the rev limiter down the main straight, you get to the point where it’s whoever gets to the rev limiter first and you can’t do anything with it.

“It doesn’t matter what sort of run you get out of the last corner and that’s one of the best passing opportunities at the track.

“Moving forward that’s something we need to look for every time we come back here.

“We weren’t to know this year that with the surface being so grippy and us getting such a good run out of the last corner.”

Coulthard remains third in the championship leaving Hidden Valley, despite being an innocent party in first corner incidents during Saturday’s two races.