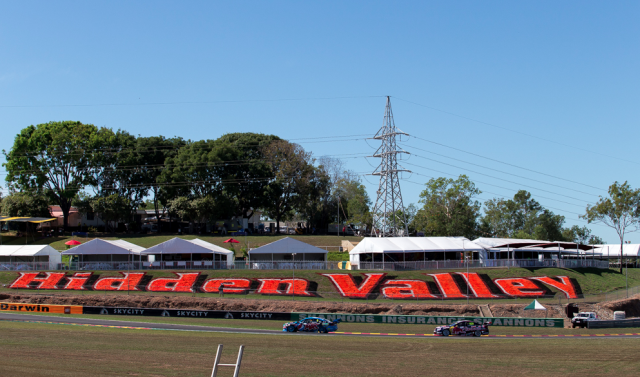 David Reynolds admits that continuing his strong practice form through both qualifying sessions today will be an even greater challenge thanks to the new tyre format.

Under revised rules for Darwin that are expected to be repeated at other Super Sprint events later in the year, a set of soft tyres must be used for the second qualifying session and race.

The switch between compounds from one qualifying session to the next holds the potential to alter the pecking order.

The fastest Friday times were done on a mix of new hards and pre-marked softs as teams prepared for the task of qualifying on both compounds.

Prodrive’s in-form Falcons led the way on both types of tyre, with Reynolds utilising pre-marked softs to be fastest and Mark Winterbottom second on the hards.

“I think it’s going to be pretty challenging with one qualifying on each compound,” said Reynolds.

“We’ve just got to work out the best way to go about it to get pole in both.

“(At the moment) Mark’s got the hard tyre worked out… he’s a few tenths quicker than me on the hards, but mine suits the soft tyres a bit better.”

Prodrive team principal Tim Edwards says that the format will trigger significant set-up changes in the 15 minute break between the two sessions.

Items such as springs and dampers are usually only changed in the break on cars that have struggled in the opening hit-out.

“You’ll see a lot more activity in the garage between the sessions then you would have before,” explained Edwards.

“Everyone will change their car in some way to tune it for the second session.

“You won’t really be able to do it on the fly, you’ll have to have it prepared and ready to go.

“The reality is that his feedback from the first qualifying is almost irrelevant because the car is going to behave differently from one tyre to the other anyway.

“It’s going to be a case of forgetting about the first session and getting on with the second.

“It’s certainly more challenging for everyone to get it right on both compounds.”

Running both of the back-to-back sessions on the hard tyre saw the same pole-sitter for both races at Symmons Plains (Craig Lowndes) and Winton (Chaz Mostert).

Only Barbagallo, where Winterbottom scored the second pole after falling 0.06s shy of his team-mate in the opening session, provided two different pole winners.

The revised tyre rules will also have an impact on the races, with degredation set to have a far larger role in the second race.

Qualifying still looms as vital, however, with each race remaining just 60km in length.

The V8 Supercars will have a final 15 minute practice session at 0855 local time prior to qualifying at 1130.