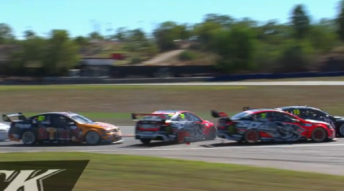 The HRT cars spin after contact between Courtney and Van Gisbergen. pic:V8TV

Holden Motorsport manager Simon McNamara has apologised to fans after a disastrous opening race for the manufacturer at Hidden Valley.

Fords and Nissans swept to the top six places after incidents on the first and penultimate laps decimated the leading Holden contenders.

The action started when Jamie Whincup slid into Fabian Coulthard in the battle for third at the first corner.

It was an incident between Shane van Gisbergen, James Courtney and Garth Tander on a late Safety Car restart, however, that raised even more eyebrows.

Contact between Courtney and the Kiwi in the braking area sent the 2010 champion into the path of his team-mate for the second consecutive race meeting.

Sitting fourth and sixth at the restart, the HRT pair finished at the back of the field.

“Sorry @HoldenMsport race fans for what we can only described as embarrassing,” Tweeted McNamara. “The Lion does not roll like that.”

HRT team principal Adrian Burgess was hesitant to apportion blame for the clash before seeing further onboard vision, but was left highly frustrated after a squandered pole position.

“Two laps to go and sitting fourth and sixth, take the points and put them in the bank.

“We can’t afford to be coming home wherever we were. It’s just pointless. I’m not happy at all.

“James is a big boy and he’s knows that we’re not going to win a friggin’ championship doing this.

“It’s another one that we need to put behind us and get on with it.”

Courtney and Van Gisbergen had differing views on who was at fault for their contact.

The former appeared to move into the path of Van Gisbergen as Tander, with a superior run, followed Rick Kelly around the outside of the duo.

“I was running side-by-side (with Van Gisbergen) and then we all went into Turn 1 and I got hit from behind,” said Courtney.

“I was pulling up but then I got hit again and then hit into him (Tander). I wasn’t trying to pass him or anything.”

The Tekno driver meanwhile dismissed the clash as his rival’s fault.

“It certainly wasn’t our fault but it ruined a pretty good points race,” he said.

“Those races aren’t worth many points but we still would want to get them.

“The car was good, we got the fastest lap so we’ll see what we can do for the next one.”

Tander meanwhile dismissed the clash as just another setback in a troublesome weekend.

Suffering from a steering problem in opening practice, the team struggled with set-up and qualified deep in the field for both races.

“It is just how our weekend is going at the moment,” he said.

“We had a lot of dramas yesterday with the car and then again this morning and we qualified out of position.

“We got right up there but got caught up in someone else’s accident which is disappointing.

“It has happened a bit lately but there is nothing we can do about it now.”