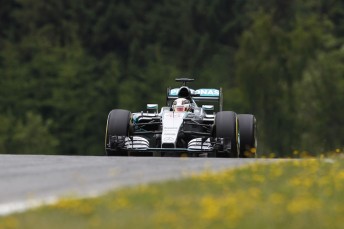 Lewis Hamilton will start the Austrian Grand Prix from pole position despite suffering a spin in the dying seconds of qualifying at the Red Bull Ring.

The session ended in bizarre circumstances as the Mercedes duo of Hamilton and Nico Rosberg both suffered off track excursions as the pair went head-to-head for pole position.

Rosberg had set the initial pace on a drying track in Q3 although Hamilton responded with a 1:08.455s, which proved to be good enough for pole.

Hamilton’s effort set up a thrilling climax to the session only for the Brit to suffer a spin on his final lap at Turn 1, which was followed by a mistake from Rosberg that saw the German stranded in the Turn 9 gravel trap.

Ferrari’s Sebastian Vettel emerged as the best of the rest in third while disaster struck team-mate Kimi Raikkonen, who failed to progress from Q1.

The Finn misjudged the session as times tumbled rapidly, forcing him to start the race from 14th on the grid.

Max Verstappen once again showcased his growing stature in the sport by claiming seventh for Toro Rosso, ahead of Sauber’s Felipe Nasr and the Lotus of Romain Grosjean.

Red Bull Racing’s Daniil Kvyat managed to progress to Q3 but an earlier change to a fifth engine will see him drop to 17th spot as a result of a 10 place penalty.

The same penalty will also be applied to team-mate Daniel Ricciardo, who could only post time good enough for 14th in the session.

However, the Australian will be forced to cop a further five second time penalty in the race as he can only serve six positions of his grid drop penalty.

The McLarens of Fernando Alonso and Jenson Button will occupy the final row of the grid after being issued with a 25 place grid penalty for engine and gearbox changes.

Similar to Ricciardo, the duo, who were 15th and 17th quickest in qualifying, will serve further time penalties during the race.