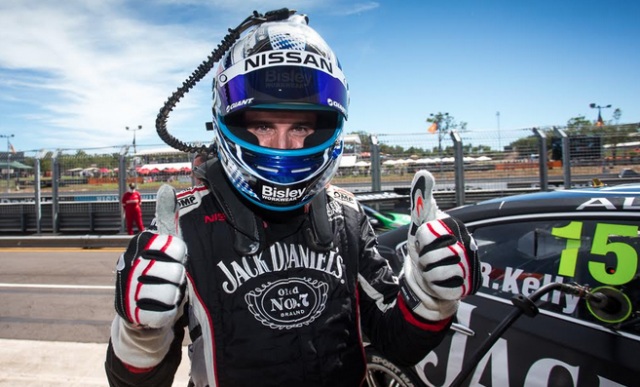 Rick Kelly broke a near four-year pole drought by coming out on top in qualifying for Race 14 at Hidden Valley Raceway.

The Nissan driver blitzed the soft tyre session after a promising seventh in Race 13 qualifying, run on hard tyres.

In a mirror image of his rival’s results, James Courtney scored the Armor All Pole Award for Race 13 before dropping to seventh for the second heat.

James Courtney denied Chaz Mostert a fifth straight pole position by edging out his Ford rival in the first session.

Mostert had set the benchmark of 1:07.15s on his first lap before narrowly failing to improve the next time by.

“We really struggled with the car yesterday,” said Courtney post-session. “We had a bit of a find overnight and the car was quite good this morning so it was good to back it up then.”

Jamie Whincup sat 14th after his first lap before improving to third on his second.

Fabian Coulthard improved from seventh to fourth after the flag, demoting Shane van Gisbergen and Mark Winterbottom to fifth and sixth respectively.

The Nissans of Rick Kelly and James Moffat filled seventh and eighth ahead of Craig Lowndes and Tim Slade.

Rick Kelly won the Race 14 pole with a record setting 1:06.29s as his Nissan revelled on the soft compound tyre.

The former champion, who had not scored a pole since Sandown, 2011, proved just 0.01s quicker than a subsequent effort from Coulthard.

While drivers enjoyed two-lap runs on the hards in the earlier session, the softer compound was only good enough for one fast time.

Whincup was one of few to improve on his second lap but could still do no better than 17th.

“I tell you what we didn’t expect pole here at Darwin,” beamed Kelly, who had gone 120 races without a pole position.

“I’m really excited about… that we really had to guess what grip the soft tyre was going to offer.

“It really is a sport that relies on momentum to get results so hopefully we are feeling that now.

“It’s a real credit to the guys to get us to this point.”

Reynolds meanwhile found no more joy on the soft tyres to end up 13th, this time 0.43s from the top spot.