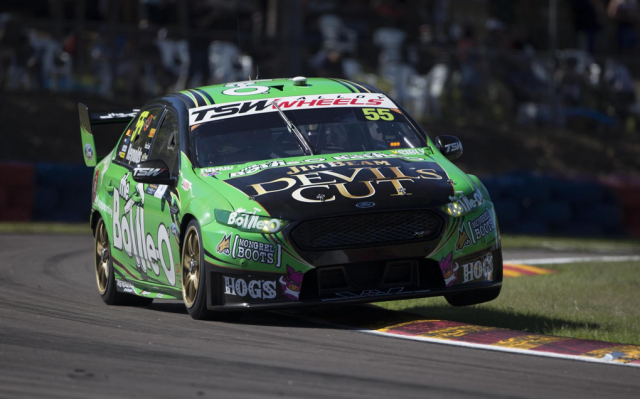 David Reynolds set the fastest time in both sessions

David Reynolds remains the man to beat in Darwin as he lowered his Hidden Valley practice lap record to finish on top in the second V8 Supercars practice session.

Boosted by his impressive showing in opening practice, the Bottle-O Racing driver went on to post a stunning 1:06.73s effort to smash his practice lap record set in the earlier outing.

Championship leader Mark Winterbottom trailed his Prodrive team-mate by 0.08s with a last gasp lap on the hards.

Brad Jones Racing’s Fabian Couthard managed to break the Prodrive stranglehold in third on the harder compound, with a soft-shod Chaz Mostert in fourth.

James Moffat emerged as the top Nissan runner in fifth as he posted his personal best on softs late in the session.

The Holden Racing Team had struggled for the best part of the session but James Courtney gave the squad some encouragement in sixth ahead of the reigning V8 Supercars champion Jamie Whincup.

McLaughlin had suffered from power steering issues earlier in the day which forced the Garry Rogers Motorsport team to conduct repairs between sessions.

Ambrose enjoyed brief run at the top of the time sheets as he completed another short stint in the #17 DJR Team Penske Ford Falcon.

Several drivers suffered off track excursions as they tried to adapt to the new track surface, although the only stoppage was caused by a grassfire on the exit of Turn 1 at the halfway stage.