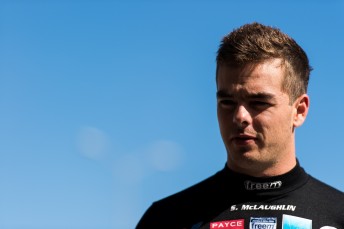 Scott McLaughlin heads into Darwin with a new wave of confidence

Scott McLaughlin believes he can reignite his V8 Supercars Championship campaign with victory at Hidden Valley after a productive five-week break for the Volvo team.

The Garry Rogers Motorsport driver has endured a difficult start to the season with a lack of pace, coupled with a string of mechanical failures, seeing him 16th in the standings.

Without a top six finish from 12 races this year, the Volvo squad has been working hard to find vital improvements to bring the S60 back to the sharp end of the grid.

The development push has seen McLaughlin label this weekend’s event as his best shot for victory so far this season.

“I think we are on top of a lot of things that we wanted to get on top of earlier in the year and the break has allowed us to do that,” McLaughlin told Speedcafe.com.

“The boys have been working unbelievably hard at the workshop to make that happen and I’m really confident this weekend. I feel we can have a really good run.

“The car has made some leaps and bounds I think it is a step in the right direction that’s for sure.

“There are a lot of upgrades; a few things on the steering and the engine.

“There is a lot of stuff the boys wanted to do (earlier this year) but just didn’t have the time to do it and put it on the car to make it work nice.

“My target is always to win and its the same for everyone and I feel like realistically we can win.

“Every round I go to I want to win and I feel this round is possibly the best shot this weekend. I guess that is why I’m so positive.”

While his confidence is at a season high, McLaughlin says he is unsure if the change of track surface at the Hidden Valley circuit will prove to be a defining variable.

“The surface is really nice they have done a cracking job,” added McLaughlin.

“Every time we come here (Hidden Valley) there is always something new and that is what makes it so exciting when we come here every year.

“I don’t know if it will change the order much.”

The drivers will have their first run on the new surface when Practice 1 gets underway at 1100 local time.