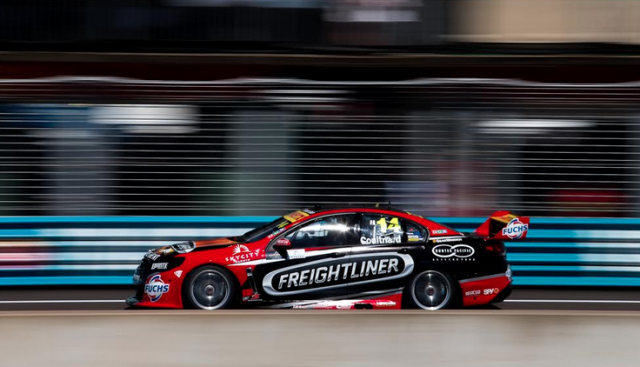 Fabian Coulthard is quietly confident that his strong start to the season will continue at Hidden Valley after splitting the in-form Prodrive Fords in Friday practice.

Debuting a new chassis this weekend, the Kiwi ended up third in Practice 2 behind David Reynolds and Mark Winterbottom.

All three of the front-running Prodrive Fords, including fourth-placed Chaz Mostert, switched between pre-marked soft and new hard tyres in the second session.

Coulthard, however, ran hards throughout as the Brad Jones Racing team focussed on improving on their traditionally weaker compound.

“We stuck to our program,” explained Coulthard, who had been down in 19th during opening practice.

“We were able to do good, long simulation runs and the car felt pretty good.

“We haven’t bolted a set of soft tyres on it yet but we’re looking forward to doing that tomorrow.

“We generally find the weakness in our car is on the hard tyres, so the most running we could get and make it the best we possibly can on that (the better).

“We’ve (already) got a fair handle on how the soft tyre is going to perform.

“I don’t want to speak too soon but the car’s strength is generally the soft tyre so hopefully we’ll be give it a good run tomorrow.”

Coulthard currently sits third in the championship, scoring at least one podium finish at three of the four events held to date.