Ambrose returns to the track in Darwin practice

Ambrose returns to the track in Darwin practice 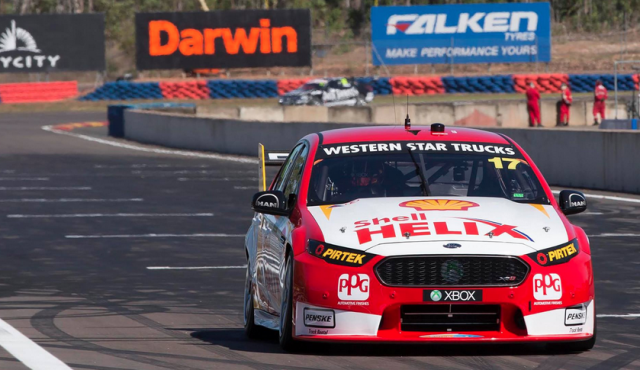 Marcos Ambrose took to the track in Practice 1

Marcos Ambrose admits that he’s still far from comfortable in the current generation V8 Supercars after returning to the wheel in opening practice at Hidden Valley.

Driving in a competitive session for the first time since March, Ambrose completed the opening third of the 60 minutes before handing over to primary driver Scott Pye.

Running on pre-marked hard tyres, Ambrose was 24th with a 1:09.85s when he exited the car.

Pye then recorded a 1:08.88s best on hards before a late dash on softs netted a 1:07.82s for the second fastest time behind Prodrive’s David Reynolds.

When asked if he felt comfortable in the car, Ambrose said “no, I don’t to be honest with you”.

“They’re tricky cars, very sensitive to the brake pedal and I guess you’ve got to be in them all the time,” he continued.

“You’ve got to have grown up with these new generation cars to really understand them.

“The stuff that I’ve always done to drive a car fast doesn’t seem to work in these.”

The former two-time champion added that the resurfaced circuit provided less grip than he had expected.

“The track surface is very smooth, it doesn’t have as much grip as you think,” he said.

“Walking around the place yesterday it looked like it was going to have a ton of grip but you’re still sliding around a bit.”

Pye meanwhile was left encouraged by his promising start to the weekend.

“I feel the car at the moment is pretty strong but it’s only Practice 1 and there’s a long way to go this weekend,” he told Speedcafe.com.

“We just need to put our heads together and keep improving it.

“For Marcos it was just a chance for him to get his eye back in so I didn’t talk to him too much during the runs.

“But he didn’t make any mistakes and was in the top 15 for most of it so it was a positive session.”

The team is yet to decide whether Ambrose will again share the car with Pye in Practice 2.

Cameron Waters was the only other co-driver to cut laps in Practice 1, sharing the #6 Pepsi Max Ford with Chaz Mostert.