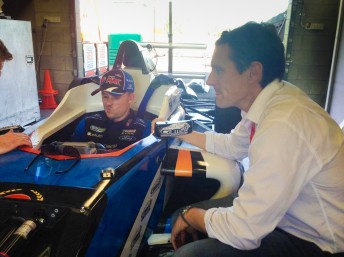 Winterbottom enjoyed a brief seat fitting in the car today

Mark Winterbottom will return to his open-wheel roots when he demonstrates a Formula 4 car at Hidden Valley Raceway on Friday.

The Prodrive star will complete a handful of laps in the Ford-powered Mygale immediately after the day’s second and final V8 Supercars practice session.

The demo will mark the first time that a Formula 4 car has run at a V8 Supercars event and comes ahead of the category’s debut at the Castrol Townsville 400 next month.

Winterbottom finished second to Jamie Whincup in the 2002 Australian Formula Ford Championship before moving into the V8 Supercars Development Series the following year.

F4 category manager Cameron McConville says that Hidden Valley is a good opportunity to showcase the championship prior to Townsville.

“V8s have been very proactive in helping us promote Formula 4 and offered us some track time to demonstrate the car here,” McConville told Speedcafe.com.

“We thought that, being a Ford engined car and Frosty is leading the championship, he’d be the perfect man for the job.

“I think it’s great for the V8 pitlane to come and see one, but also for the crowd here and the television audience to see what’s to come before Townsville.”

Greg Murphy is slated to have a brief steer of the car for V8TV on Friday in Townsville.

McConville is hopeful of having 12 cars racing at the opening round, split between Team BRM, AGI Sport and Dream Motorsport.

The category has one more group test scheduled ahead of Townsville, which will take place in the week of the event at Queensland Raceway.

There are currently 12 complete race cars in the country, with a further six scheduled to arrive on Saturday.

McConville has meanwhile scaled back his own racing commitments ahead of F4’s debut, handing over the reigns of his Carrera Cup entry to John Martin.