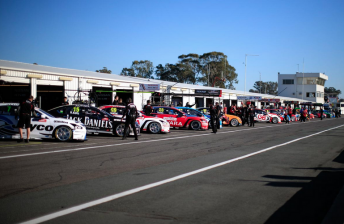 Hybrid technology appears some way off for V8 Supercars

V8 Supercars isn’t expecting any manufacturers to make a serious push for hybrid technologies as part of their Gen2 plans.

The category has stated a willingness to discuss any powertrain options with manufacturers as part of the new rules, which will come into force in 2017.

Six-cylinder turbos are seen as the most likely new engines to enter the series alongside the existing V8s, with parity between the two configurations the current focus of the category’s technical department.

Nissan Australia CEO Richard Emery raised eyebrows at Le Mans last weekend when he suggested that the company’s global bosses might be keen on introducing hybrid technology as part of Gen2.

“It would not surprise me that when I have the next discussion with headquarters about this (Gen2) that they’ll ask the question,” said Emery when asked of the company’s position on hybrids.

“How can we get some innovation and technology into the car? It’ll factor into the decision making (about what body and engine package we use for Gen2).”

V8 Supercars CEO James Warburton told Speedcafe.com that the prospect of hybrid technologies has not been formally raised by any manufacturer that the category has engaged with.

“There’s been no discussion with any manufacturer about wanting to look at hybrid technology and our view is that it would be a very expensive exercise,” Warburton said.

“Nothing is off the table and if a manufacturer wants to do it then we would have the discussion, but we don’t imagine it would be a consideration for 2017.”

While the cost factor would almost certainly rule out the kind of technology seen in the World Endurance Championship, Emery admits that parity would also be a major issue.

“I’d say it’s not on their radar not because it wouldn’t be good for the category, it would be about how the hell do we work out what the effect it has on parity?” he added.

“I think that’d be their challenge more than anything else.

“Maybe the discussion is can we have one car running like a Garage 56 (the ‘experimental’ class for cars outside the rules at Le Mans)?

“You can tell from Nissan’s approach (at Le Mans) that maybe that would be something we would consider, having one car running in a Garage 56 environment.”

Nissan ran Garage 56 projects at Le Mans in the two years prior to the debut of its full LMP1 effort last weekend, running around the pace of the second-division LMP2 cars on each occasion.