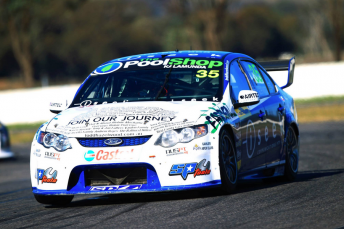 Rising Dunlop Series star Todd Hazelwood says that a fundraising dinner in Adelaide next week will play a vital role in ensuring he makes Round 4 in Townsville.

Supported by his mother, Sharon, Hazelwood ran 64 sausage sizzles last year which, opportunistically, even led to a part-cash, part-product deal with a sausage company earlier this season.

The former Formula 3 runner has now taken his efforts to the next level by organising a four-course, 170 seat fundraising dinner to be held in his native Adelaide next Wednesday.

Still striving to sell the final tables and organise a myriad of raffle prizes for the night, Hazelwood proudly says that the efforts should be enough to keep him on the grid.

“It’s a big event for us and financially we need it to be successful,” Hazelwood told Speedcafe.com.

“Fundraising is a big contributor to keeping our racing going because sponsorship is quite hard to get. “We had a major sponsor pull out at the end of last year and there’s no question that we’re chasing our tail financially to make it all happen.

“Our banks are maxed out, we can’t find money that’s not there, but we put in a hell of a lot of work to keep going.

“We haven’t got a major sponsor for Townsville at the moment so the fundraiser will basically get us there.

“We have a sponsor for Ipswich, but then Bathurst and Sydney there’s still a big question mark over.

“We’re going to work harder than ever to make that happen.”

Guests at the dinner will include DJR Team Penske managing director Ryan Story, who has personally thrown support behind his fellow South Australian’s ongoing efforts.

Hazelwood’s on track exploits yielded eighth in the Dunlop Series last year, where he also picked up the Mike Kable Rookie of the Year Award.

Currently sixth in this year’s standings, Hazelwood says he’ll be aiming for podiums in the second half of the season.

“We’ve had a bit of an up and down start to the year,” he admits.

“But we’re sixth in the championship, the highest placed driver without an endurance co-drive and the youngest driver in the top 10, so we’re pretty happy with where we’re placed.

“Last year we had strong results at the tracks that are coming up so we’re hoping that we can start knocking on the door of podiums later in the year.”