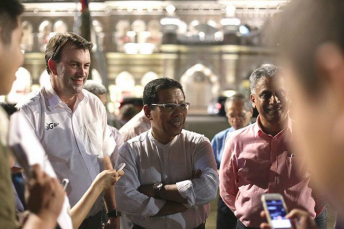 The KL City mayor visited the construction site on Tuesday

Construction of a brand new street circuit for the Kuala Lumpur City Grand Prix is underway ahead of the inaugural August 7-9 event.

Work is being carried out on the 3.2km circuit between 10pm and 6am in order to minimise disruption to traffic flow in the area.

In the below video, technical consultant Simon Gardini explains the task ahead, which will see over 1,300 concrete barriers and 1,600 metres of guard rail used to line the circuit.

“There are critical paths and things that we need to keep control of, like any complex project,” he said.

“But touch wood we’re 100 percent on schedule and I’m hoping that my team keeps it that way.

This year’s event will feature a demonstration of five V8 Supercars before a planned championship round at the venue from 2016.

CLICK HERE to see a computer generated video of the track layout.