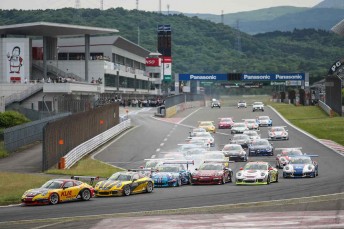 The event held on a newly constructed 3.2km Kuala Lumpur street circuit from August 7-9 will feature just four categories, including a five car V8 Supercars demonstration, ahead of the championship’s full debut next year.

Speedcafe.com understands the categories were announced without formal contracts in place.

The KL City Grand Prix will continue to be headlined by the event’s own KL City GT Cup, supported by the Lamborghini Super Trofeo championship, Formula Masters and V8 Supercars.

“For 2015 we will not be staging the Porsche Carrera Cup or the Audi R8 LMS Cup races as planned earlier, as the available track time, with such a large line up of entertainment, is against us,” said GT Global Race CEO Mr M Arrasu.

“Whilst these two categories won’t make it to us this year, we hope to see them on the streets of KL in the future.”

Work has begun on the construction of the street circuit this week following a visit from FIA representative Tim Schenken.