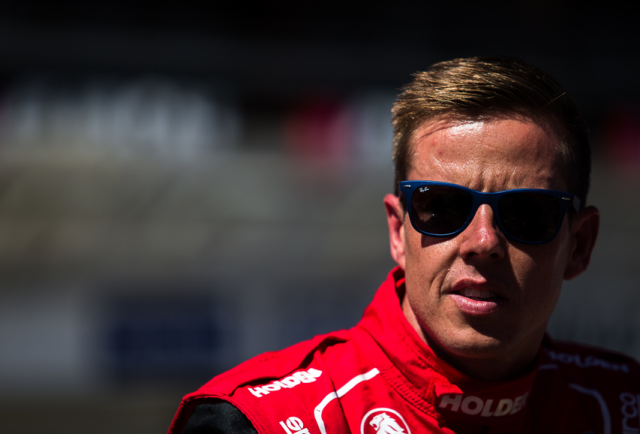 James Courtney has vowed to maintain his aggression when the V8 Supercars Championship resumes at Hidden Valley, stressing he’ll do “what ever it takes” to end Triple Eight’s run of championship success this year.

Walkinshaw Racing endured a tough weekend last time out at Winton, struggling for speed with all four of its cars at the rural Victorian circuit.

The low point came at the start of the second Saturday race when Courtney, trying make ground from 13th on the grid, took out stablemates Garth Tander and Lee Holdsworth at the first turn.

That incident followed another highly publicised opening lap collision earlier in the season at Symmons Plains, which saw Will Davison’s Mercedes turned around in front of the field.

“I’ve probably been involved in a few more things than normal,” Courtney admitted ahead of this weekend’s Skycity Triple Crown in Darwin.

“I’m not here to make friends, in the end I’m here to win and deliver and I’m not worried about who I upset along the way.

“I wanna win, I do what ever it takes to win and sometimes you have to be a little bit more aggressive, but it has to be calculated.

“Sometimes you make mistakes like I did at Winton when I took Garth out and that obviously wasn’t the right thing to do.

“But it hasn’t affected the way I do things. I’ll still attack my racing as aggressively as what I normally do.

“I just really want to get this championship (win). Triple Eight have had way too long a run at wrapping up the championship so it’s time we take them down.”

Despite the Winton struggle, Courtney is confident that the factory Holden team will be a competitive force at Hidden Valley.

The 2010 champion has never won a race at the Top End venue, but expects the circuit and the addition of the soft tyres to the Saturday format will help his cause.

“Our engine package is really strong at the moment so with the main straight just over a kilometre long horsepower is a big winner there,” he said.

“We’re running the soft tyre again which is really quite good in our cars, we get really good longevity out of it and also good car performance.

“So I’m pretty excited going to Darwin. I think we could easily come away with a win so long as we all do our job properly and no one mucks up.”

While Prodrive has been the form team over recent months, Courtney nominates second placed man Craig Lowndes as the one to beat for the title.

“Craig has been really quick  throughout the whole year and probably has done a little bit better job than his team-mate so I think Craig is still the one that we’ll be chasing,” he said.