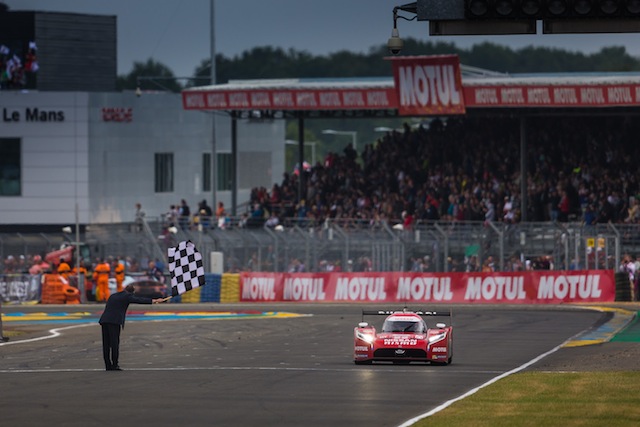 Nissan insists it has built a firm base for its World Endurance Championship program despite all three GT-R LM NISMOs failing to be scored as finishers at Le Mans.

Electing to debut its front-wheel-drive V6 Hybrids on a theatre of monumental proportions at La Sarthe, Nissan remains confident its program can evolve into a competitive force.

After qualifying some 20 seconds adrift of the outright pace, a host of problems from the outset of the twice-around-the-clock race saw the squad scramble to clock up much needed mileage.

The #22 driven by Harry Tincknell, Michael Krumm and Alex Buncombe greeted the chequered flag, but was not scored as a finisher due to being 154 laps down on the winning Porsche 919 Hybrid.

Non-finishes for the #21 and #23 saw respective exits with a lost wheel and a suspension failure after the latter saw it stranded at the start of the event with a clutch problem.

By comparison, Porsche’s return to the top category at Le Mans last year with its twin 919 machines saw an 11th place finish for its second car.

The sister car of Timo Bernhard, Mark Webber and Brendon Hartley led during the closing hours but was not classified after striking mechanical problems.

Unlike Porsche, a cramped development period and setbacks with its hybrid system saw Nissan go into the Le Mans endurance epic without any previous competition runs.

While Nissan was cautious with the way it used its hybrid energy recovery system, it remains resolute that it can make solid inroads and be competitive.

A new, more powerful hybrid unit is expected begin trials for the 2016-spec GTR-LMs at Kentucky from September.

“For sure we have had problems but that’s what happens when you’re innovative,” Cox said.

“Our engine is strong and we were able to quickly fix the other problems that we had.

“We have learnt an incredible amount at Le Mans and our battles will only make us stronger.

“Most LM P1 manufacturers don’t finish Le Mans at their first attempt so it was important for us to hit this target (by getting a car to the flag).

“The guys in the garage are the heroes this weekend and the drivers have all done an incredible job, sometimes in very difficult circumstances.

“They needed physical and mental strength in equal measure this weekend and every one of the nine delivered for us.

“We dug in, we solved our problems, we exploited the limits of our current performance and we finished the Le Mans 24 Hours.”

British driver Tincknell admitted the cars fell short in being stretched to their limits.

“We ran the entire race making sure we were mechanically sympathetic so we could rack up the miles and finish Le Mans,” Tincknell said.

“I certainly didn’t expect to hit a massive lump of ‘something’ (debris) that was right in the middle of the racing line.

“The car was feeling good at that time too so it was a real shame to have to come in with damage and lose a chunk of time.

“We had struggled a bit in the early part of the race but I managed to immediately pick off seven or eight P2 cars and then concentrated on bringing the car home in one piece.”

Nissan will now undertake a full analysis of its performance ahead of the next WEC round, the Nurburgring 6 Hours on August 30.