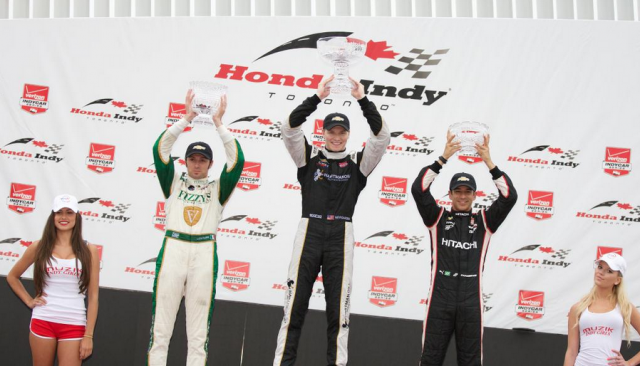 The American vaulted to the front after an early stop for slicks on lap 28 fell just prior to a full course yellow.

With no more rain returning to the Canadian venue, Newgarden was able to control the race for the duration, eventually leading Filippi to the flag by 1.4s.

The result backed up success at Barber Motorsport Park in April for Newgarden and CFH, which was created following the off-season merger of Sarah Fisher Hartman Racing and Ed Carpenter Racing.

“I’m just really proud of everybody on this team,” said co-owner Sarah Fisher.

The incident that dramatically swung the race in Newgarden’s favour was a single-car spin for James Jakes’ Schmidt Peterson Dallara.

The race’s only retirements were Carlos Munoz, who suffered a gearbox failure while following the same strategy as Newgarden, and Stefano Coletti, who damaged his front-wing before crashing out.