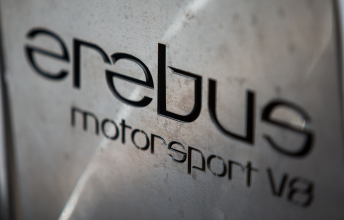 Erebus Motorsport has made a significant cut to its V8 Supercars workforce amid an ongoing internal review of the team’s operations.

Six staff were made redundant from Erebus’ Queensland-based workshop last week, combining with several voluntary exits over recent months to leave the squad at little over 25 members.

The reduction took place largely in administration, with the crew of engineers and mechanics for its two-car V8 Supercars effort remaining unchanged.

The rationalisation of staffing levels is the first outward sign of change since Campbell Little and Barry Ryan were charged with overhauling the operation two months ago.

Although shying away from details, an Erebus statement responding to Speedcafe.com’s enquires reaffirmed that the ongoing internal review is “aimed at streamlining the team’s operations”.

“As the review is an internal matter, the outcomes of that process will remain private,” read the statement.

Other moves taking place as part of the efficiency-focussed review are understood to centre around improving internal processes.

The team has struggled to become a consistent front-runner since the Erebus buyout at the end of 2012, despite owner Betty Klimekno spending heavily on its Mercedes-AMG package.

In an unrelated development, the team is currently without its technical director and car #4 race engineer Wes McDougall, who is on extended medical leave.

The long-serving Erebus/SBR engineer underwent surgery immediately after the recent Winton 400 and is unlikely to return for some months.

Little, who works part-time for Erebus, took over duties on Ash Walsh’s car part-way through the Winton weekend and will continue to engineer the car until McDougall returns.

“Wes has taken leave as he recovers from a pre-planned surgery which he was admitted to hospital for during the Winton weekend,” a team spokesman confirmed.

“It is quite an extensive recovery process and we are not exactly sure when he will return to work but the team is in regular contact with him and wishes him a speedy recovery.

“In the interim, Campbell Little has taken over as race engineer for Ash Walsh in car #4 and will continue in that role until Wes is able to return to work.’’

Erebus drivers Will Davison and Walsh currently sit 13th and 24th in the championship respectively, with the former having scored the team’s second ever race win early last month.