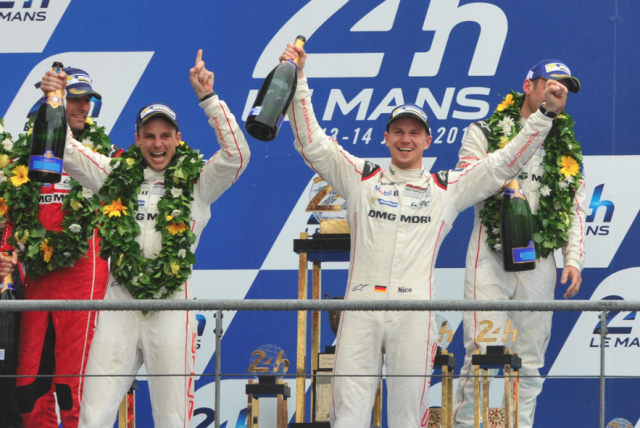 Bamber and Hulkenberg celebrate on the podium

Chris Amon has applauded Earl Bamber’s Le Mans 24 Hour win by labelling it as life-changing moment for the 24-year-old.

Amon and his late Kiwi compatriot Bruce McLaren famously took a Ford GT40 to victory at Le Mans in 1966 at the height of the Ford versus Ferrari battles.

The ex-F1 driver, who enjoyed stints with various grand prix teams including Ferrari from 1963 to 1976, has hailed Bamber’s triumph alongside Nico Hulkenberg and Nick Tandy.

Amon was also quick to pay tribute to Kiwi runner-up Brendon Hartley who along with Australian Mark Webber and German Timo Bernhard was considered unlucky not to have finished on the top step.

Bamber’s birthplace, Wanganui, and Hartley’s home-town of Palmerston North are both roughly 30 minutes drive from the farm near Bulls on the North Island where Amon grew up.

“I’m a little sorry for Brendon because he would have also deserved it and certainly will be feeling a little sad that he could not be the first Kiwi since me.

“But he will come back and he will win this also, I believe.”

While Amon split his career been sportscars and Formula 1, the retired racer acknowledges that, even with a Le Mans victory now on his resume, the chances of Bamber following a similar path are slim.

Bamber raced in a litany of open-wheel classes before a lack of opportunities saw him switch to Carrera Cup racing in 2013, currently running full-time in the Supercup.

“The problem is there are no opportunities in F1, but this result will certainly establish both of them (Bamber and Hartley) in WEC, ” said Amon.

“They could have a long career in sports cars if that’s what they want.

“I think Brendon was already there in that regard but it will also now establish that for Earl, which is great to see.

“Realistically that (WEC) is their best career path at the moment.

“And why not? I can see that type of racing growing whereas, to me, I can see F1 only staying where it is or possibly even declining in world terms.

“One of my ambitions has been to see a Kiwi win again at Le Mans and the other is to see a Kiwi back in Formula 1, in a decent car – not something around the back of the field.

“Unfortunately, I think the F1 thing might be something too far.”