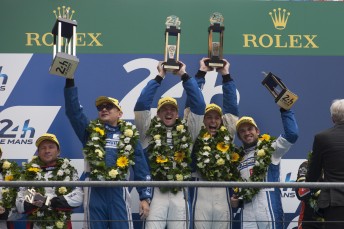 KCMG became the first Hong Kong squad to claim victory at the Le Mans 24 Hours with a triumph in the hotly contested LMP2 class at the French classic.

The squad’s Nissan powered Oreca 05 emerged as the class of the 19 car LMP2 field throughout the prestigious twice around the clock endurance, scoring pole position, the class victory and the fastest lap.

KCMG were rarely challenged during the contest with the only scares arriving in the final third of the race. 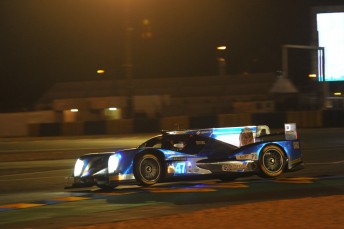 Bradley went off the road along with the #23 LMP1 Nissan at Arnage corner in the 19th hour, but managed to rejoin the race, before Lapierre made a similar error at Indianapolis in the final three hours.

In the end, the KCMG’s new Oreca 05 package completed 358 laps to finish ninth overall and 48.1s ahead of the Jota Sport entry of Simon Dolan, Mitch Evans and Oliver Turvey.

The team’s maiden triumph at Le Mans has propelled the Honk Kong outfit to the top of the FIA Endurance Trophy for LMP2 Teams standings.

“Of course winning LMP2 is great, but what is even better is the success that KCMG drivers have had at this year’s Le Mans 24 Hours,” said KCMG Managing Director Paul Ip.

“The entire team and myself are very happy to have placed Asia on top of the podium here at Le Mans. This year has really been something else.”

KCMG will return to action in the FIA Word Endurance Championship when the series heads to Germany for the Nurburgring 6 Hour on August 30.

In the GTE Am class, Taiwanese Porsche outfit Team AAI managed to bring both their cars home.