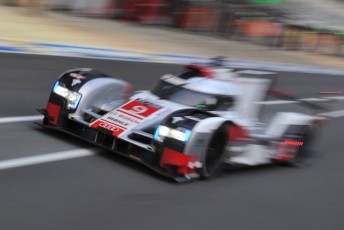 Audi and Porsche have engaged in an absorbing dice after the opening third of the Le Mans 24 Hour.

Trading spots in a see-sawing game of chess, the #9 Audi driven by Rene Rast led the way ahead of Mark Webber’s #17 Porsche.

Third was being held by F1 driver Nico Hulkenberg in the #19 Porsche.

The field was compressed by the Safety Car as the third placed LMP2 class Alpine shunted heavily just shy of the 8 Hour mark.

In only the second time Webber has made the starting line in the French classic, the Australian provided some inspiring form to give Porsche a slender advantage.

The #17, which was started by Timo Bernhard before handing over to Kiwi Brendon Hartley, occupied several spells at the front, each time having to claw its way back to the lead.

After six hours the red #17 Porsche held a slender lead over the #7 Audi with Marcel Fassler at the wheel.

Then at the 7 Hour mark, the #9 Audi R18 e-tron quattro at the hands of Rene Rast found its way to lead the field.

The #17 Porsche held second ahead of the #7 Audi but the fourth placed #18 919 Hybrid would lose touch smacking the barriers head-on at the Mulsanne Corner.

It was returned immediately to the pits to be fitted with a new front wing, sliding back in the order before recovering to fifth ahead of the #8 Audi.

Mike Conway in the #2 Toyota TS040 Hybrid was seventh, well off the pace of the dominant Audis and Porsches.

Nissan’s #22 was best placed in 21st position with Briton Harry Tincknell soldiering on in the front-drive, front-engine GTR-LM.

In the LMP2 class, the Hong Kong-based KCMG Oreca Nissan was in a strong position thanks to a classy triple stint from Nicolas Lapierre.

Jordan Taylor headed up the GTE Pro class in the Corvette Racing C7R while the GTE Am field was being led by Pedro Lamy in the Aston Martin Racing Vantage.

The Porsche Team Manthey 911 RSR of Patrick Pilet was eliminated early in the race after spectacularly catching fire.