Ogier now has a handy lead

Ogier completed the WRC’s longest day since 2002 with a 2min 13.6sec advantage in his Volkswagen Polo R over the Kiwi, who had his lead wiped out after a spin and fell back further after hitting a rock.

The duo were neck and neck through the morning’s 110km of rough road special stages east of Alghero. Paddon enjoyed better road conditions in his Hyundai i20 and extended his 8.8sec overnight lead by half a second.

But when the Kiwi spun and stalled his engine in a hairpin on the afternoon’s second stage, the Frenchman took the lead and extended it when Paddon struck a rock in the next test.

“I never said leading was impossible, but I knew my chances were small. A lot of things happened today and it was very rough this afternoon.”

Paddon patched up his car and dropped 1min 45sec limping through the final 42km Monte Lerno stage to retain second from Mads Østberg by 1min 12.0sec.

“I don’t want to be a drama queen but when it happened it ripped my heart out,” said Paddon, chasing a maiden WRC win.

“We hit a big rock on the driving line and I thought there was no way we could go on, but we strapped it up as best we could.”

Østberg won two stages in Citroën’s DS 3 but two slow punctures cost 90sec. He was 31.4sec clear of Thierry Neuville’s Hyundai i20, the Belgian surviving a power steering problem which cost a 40sec penalty as he repaired it.

Elfyn Evans had a better day in his Ford Fiesta RS to hold fifth with Jari-Matti Latvala sixth in another Polo R after winning three stages. However, he dropped two minutes changing a tyre after knocking it off the rim in a heavy landing, and five minutes after hitting a rock and breaking the suspension. 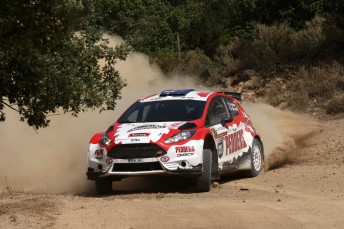 Topping off a tough day was Australia’s Scott Pedder who had engine failure in his WRC2 Fiesta.

“It looks like the head gasket has let go. The engine temperature reached 115 degrees and that’s pretty bad,”said Pedder.

“The team has had a good look over the car and they think there is a tiny hole in the radiator that has caused the problem.

“It’s possible we could restart tomorrow but there is a chance it could do even more damage, so we’re better off ending it here.”