Hayden Paddon on top in Italy

Hayden Paddon on top in Italy 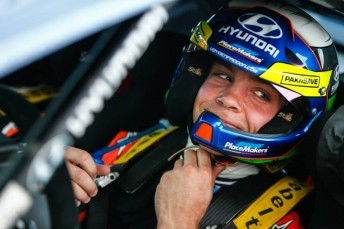 Paddon had every reason to smile in Italy

New Zealand’s Hayden Paddon has enjoyed his best day in the World Rally Championship as he surprised the expected pacesetters to lead Rally Italia Sardegna after Friday’s opening leg.

He won three of the four morning rough road gravel speed tests to build an advantage which he defended in the afternoon to head championship leader Sébastien Ogier by 8.8sec. Jari-Matti Latvala was 25.8sec behind in third.

Paddon’s low start position gave him a morning advantage of roads swept clean of loose gravel by those ahead. But he maintained his pace in equal conditions after lunch and earned the accolade of being the first New Zealander to lead a WRC round outside his home country.

However, he survived a last stage scare. “Something broke on the right rear of the car with half the stage to go. Then in one corner the back of the car went sideways and hit a bank. We decided to take it easy afterwards so we lost a bit of time.

“It was an amazing day and we have a road position advantage again tomorrow morning, so if we can benefit from that who knows what will happen,” said the Hyundai i20 driver.

Road opener Ogier had the worst of the conditions, sweeping the gravel all morning in his Volkswagen Polo R. However, a clever tyre strategy limited the losses and two stage wins kept him on Paddon’s tail.

Latvala was Paddon’s closest challenger most of the day. He won three stages but an error in the penultimate test when he bounced his Polo R off a chicane and into a bank cost more than 20sec when the impact knocked the rear left tyre off the rim.

The rocky conditions took a heavy toll. Andreas Mikkelsen hit a hole in SS3 and broke his Polo R’s rear right suspension. He made repairs but retired from third on the following liaison section with no fuel pressure.

Kris Meeke rolled his DS 3 in the morning’s opening stage, Robert Kubica crashed his Fiesta RS into a chicane in the next stage and Dani Sordo retired from fourth after an impact ripped the rear left wheel and hub from his i20.

Australia’s Scott Pedder struck the leading edge of a low rock wall and instantly broke the suspension on his WRC2 Fiesta.

“During recce the corner was covered in quite long grass, so I just didn’t note that there was anything on the inside of the corner to avoid,”said Pedder.

“It’s my mistake, I used so many ‘don’t cuts’ in my notes for this rally and the one corner I didn’t note has caught us out.”

Pedder will rejoin the rally on the second leg.