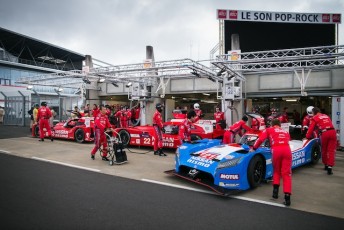 Nissan has not let its qualifying breaches hamper its voyage of discovery in the final hours leading up to the start of the Le Mans 24 Hour.

The stewards relegated the three front-drive, front-engine GTR-LM NISMOS from 12th, 13th and 15th to 30th 31st and 32nd on the grid after failing to qualify within Porsche ace Neel Jani’s sizzling pole time of 3:16.88s.

Ben Bowlby, Nissan team principal and LMP1 designer, acknowledges that its unorthodox approach of debuting the cars in the world’s toughest motor race has its pitfalls but sticks by the innovative concept.

“There isn’t a book to look at to make a 550bhp front-wheel-drive projectile to run around this track,” Bowlby said. 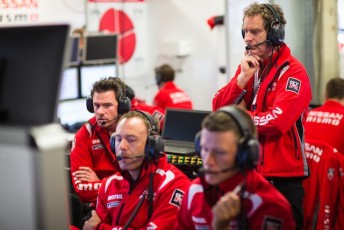 “Obviously there is a lot of discovery. We’ve been fairly circumspect about keeping everything safe and making sure we have three cars ready to start the race.

“I think we have made a tremendous amount of progress.

“We have started this project completely from scratch.

“Much of motorsport today has a blanket over the process.

“So one of the things Nissan has done is to lift the veil and show everybody a look inside the process.

“It’s uncomfortable in some respects to do that in public but it truly supports a very, very special thing that happens at Le Mans.

“Sometimes innovation hurts but I think the process is fascinating.”

Ex-F1 driver Max Chilton, who is sharing the #23 GT-LM with Jann Mardenborough and Olivier Pla, is confident Nissan will gather valuable competition data by running deep in the race.

“Everytime we put the car on track it improves and I’m finding improvements myself being new to the track,” Chilton said.

“The car feels good through the Porsche Curves. It is very unique.”