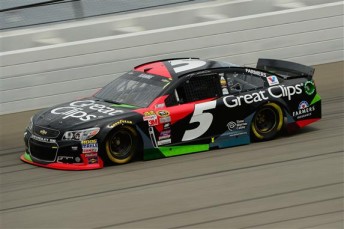 Kasey Kahne scored his first NASCAR Sprint Cup pole in three years by setting the fastest time in the final round of qualifying for the Quicken Loans 400 at Michigan International Speedway.

Kahne’s first pole since 2012 edged him ahead of defending series champion and points leader, Kevin Harvick, who was fastest in the opening two rounds of qualifying and practice.

Kahne’s pole time matched what Harvick had managed in round two – 35.645-seconds.

Brad Keselowski was third ahead of Carl Edwards, while Ryan Blaney was a surprise fifth for Wood Brothers Racing; which only compete part-time in the Sprint Cup these days.

After winning last week at Pocono, Martin Truex Jr was ninth ahead of Kyle Busch, Joey Logano and Matt Kenseth.

Brendan Gaughan was the one driver from the 44-car field not to qualify for the race.