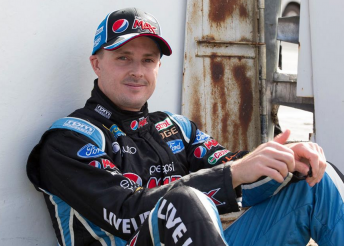 V8 Supercars Championship leader Mark Winterbottom will mix it with a selection of all-time AFL greats in this month’s EJ Whitten Legends game.

The 34-year-old has been invited to take the field as one of five guests on the All Stars team, which faces off against a squad of Victorians.

The EJ Whitten Legends game has been played annually since 1996 to commemorate the life of the late Footscray legend and raise awareness of prostate cancer.

Played at Etihad Stadium in Docklands, Melbourne, and televised by the Nine Network, the charity event is one of the highest rating Australian Rules Football matches of the year.

“They’re always looking for different people to be involved and when they phoned I was pretty keen to do it,” Winterbottom told Speedcafe.com.

“The chance to go out to Etihad with some of the best in the game in front of a big crowd, it’s going to be pretty cool and it’s great that our sport is being recognised.

“I need to brush up on some of the rules so I don’t look too stupid out there, but I can kick and catch a ball, so I should be alright.”

Originally from Western Sydney, the now Melbourne-based Winterbottom admits he had limited exposure to AFL as a youth.

He has spent plenty of time around the sport in recent years, however, with his personal trainer Paul Turk doubling as the strength and conditioning coach at the Essendon Bombers.

Often training at the team’s headquarters, Winterbottom has struck up friendships with several players and has been invited to a ‘recovery session’ with the squad ahead of the match.

“They all watch our sport as well and I think they just enjoy having something different to talk about,” he said of the team.

“I try not to get in the way when they’re doing their team training sessions but I’ve been down there quite a bit over recent seasons.

“Last year I went to a game and was in the change rooms about 30 minutes before and (then coach) ‘Bomber’ Thompson said ‘what are you doing, get your shoes on and get ready’.

“He’d seen me that many times before he thought I was a player!”

Winterbottom says he must be careful not to pick up an injury in the match, but isn’t scared of the physical presence of some of the former AFL stars.

“I grew up in Western Sydney playing rugby league with blokes that had beards when they were 12, so I’ve copped my fair share of being belted around,” he said.

“With any luck some of the other blokes will be a bit bigger and slower than what they previously were and I’ll be able to run away from them.”