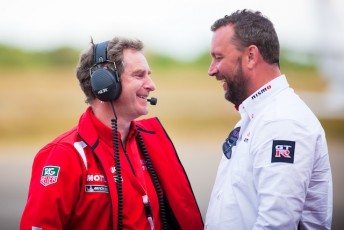 Nissan’s global sales boss Darren Cox has gone to great lengths to explain the transparent approach it has adopted over its unconventional return to the outright Le Mans 24 Hour class this weekend.

Nissan has laid its cards on the table ever since embarking on the ambitious GT-R LM NISMO attack that features the bold front-wheel-drive, front-engine layout.

Cox says that part of Nissan’s philosophy is being accountable and open which has been missing from other top categories in world motorsport.

“In a way people are judging us on us being open,” Cox explained.

“Now we know that other manufacturers have had their dramas.

“I remember the first time Audi came in (at the start of last decade). Two different concepts of car.

“They weren’t sure which way they were going. They had doors falling off.”

“Last year we had Porsche and their struggles.

“But we haven’t hidden our problems so that means everyone thinks that we are the only ones who have any problems.

“But we are showing the world that going to win at Le Mans isn’t easy.” Cox pointed out that many of the world’s leading categories headed by Formula 1 have a declining fan base.

“F1, NASCAR, WRC whatever it is, the numbers are going downwards,” Cox continued.

“And one of the reasons for that is people expect accessibility.

“And I think that’s great.

“Those blokes up there with the four rings have been doing it for 15 years and they spent $3billion and they are a machine.

“And they will win on Sunday and they will probably be on the podium, all three cars because that’s the way that they run.

“So the journalists are asking why are we doing what we are doing, this is year one of a multiple year program and this is our first baby steps and we will improve going forward.

“Those of you who have got doubts about our commitment, please come and see me afterwards which is like seeing the headmaster and I shall take you into our garage and I shall introduce you to the 100 people in our garage.

“Our openness is critical and you don’t have to like it but that’s the way the sport will grow in the future.

“It won’t be where you have shut off press conferences and you can’t ask any questions you want to ask.

“Like us or hate us this is the future.”