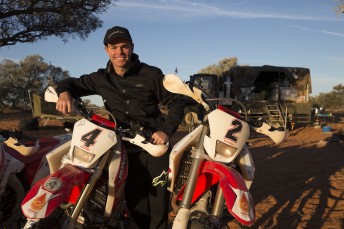 Craig Lowndes has warmed up for the return of V8 Supercars action in Darwin with a 1,500km motorcycle adventure through the centre of Australia.

The Red Bull star was invited on the trip by motorcycle racing legend Daryl Beattie, who runs regular rides in remote parts of Australia through his company Daryl Beattie Adventures.

The seven-day itinerary saw the small group of adventurers riding and camping in the Simpson Desert, taking in the famed Big Red, Erabena Track, Mokari Airstrip and Mount Dare.

Fellow riders included Holden Racing Team co-driver and part-time television personality Jack Perkins, who will co-star with Lowndes in an upcoming ONE HD documentary on the journey.

“I’ve been talking to Daryl ever since he started the business last year about doing an adventure like this,” Lowndes told Speedcafe.com.

“It was on the bucket list and it actually fitted in nicely with another goal of mine, which was to watch the Finke race.

“I drove across the Simpson with some mates back in 1996, so I had an idea of what the terrain would be like, but I hadn’t really done a lot of sand riding beforehand.

“Riding a bike with a 21 litre fuel tank on it was a challenge as well, but once we got used to that I really enjoyed the experience.”

After reaching Alice Springs, the group followed the two-day Finke Desert Race via service roads, staying with the competitors in Finke on the Saturday night.

Lowndes says that experience left him in awe of the event’s motorcycle contingent, tempering his own ambitions to one day take part on two-wheels.

“I’ve asked (my V8 Supercars teams) in the past if I could go and do it and I wanted to do it on a bike, just to say that I’d done it,” he said.

“I’m probably a bit old for it now as well. Even Daryl said he’s too fat and old for it and he’s not much older than me!

“The buggies, Trophy Trucks and Side-by-Sides that are running around are definitely more my style.

“If I was ever allowed to do it, I reckon it’d be on four wheels rather than two.”

Lowndes was full of praise for Beattie’s passion for his tours, which see the three-time 500cc world championship race winner cooking BBQs for his guests in the desert.

“He puts on a fantastic adventure,” said Lowndes, whose trip was rated ‘four out of five toes’ on the DB Adventures difficulty scale.

“We lost a couple of riders one night but we finally found them and as Daryl kept saying, it’s all about adventure. I think everyone went home with some great stories.

“For me, even in these long breaks between races I’m fairly busy doing all the PR things that we do, so it was great to be able to have a bit of time away from it all.”

Another to join the riders for the Simpson Desert crossing was Jack Perkins’ father Larry, driving a Unimog truck in which he regularly undertakes his own remote escapes.

The six-time Bathurst winner’s retirement from motorsport has included engineering work on Unimog gearboxes; designing and manufacturing a modified version that is sold worldwide with Mercedes-Benz approval.

DB Adventures uses an ex-Australian Army Unimog as a support vehicle for its tours, carrying supplies and communication equipment for the riders.