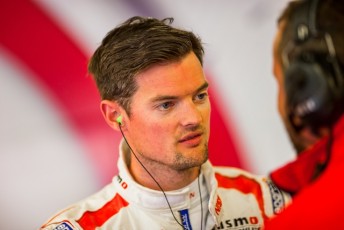 British driver Alex Buncombe has completed the Nissan Motorsport line-up for the Pirtek Enduro Cup after being confirmed to again link with Todd Kelly.

Buncombe’s return for a second year alongside co-team owner/driver Kelly was announced as he was preparing for final qualification in the #22 GTR-LM NISMO in the Le Mans 24 Hour.

Part of Nissan’s Global Athlete Program, Buncombe won high praise for his efforts for the first time at the enduros last year.

The final call on Buncombe being cleared came after it was confirmed he would not be required in the #22 GTR-LM for the Fuji round of the WEC which clashes with the Supercheap Auto Bathurst 1000 in October.

“I’m delighted to be heading back to Australia for the enduros with Nissan Motorsport,” Buncombe said, who finished seventh in the Bathurst 1000 last year.

“Last year was tough as it was my first time in a V8 Supercar but what I did then will stand me in good stead for this year.

“Knowing the car is what it’s all about so I’ll know what to expect and I should be a lot more comfortable than last year.

“I’ll also have good knowledge of Sandown and Gold Coast, which are tricky circuits and were new to me last time out.

“Top ten results would be great and it would be good to improve on the P7 we took in Bathurst last year and maybe go for a podium there.”

There remains a solid chance Buncombe will have a chance to familiarise himself with the improved Altima ahead of the opening practice session for the Sandown 500 in September with Nissan Motorsport deliberately holding its single test day for enduro preparations.

“Not all international drivers take to V8 Supercars quickly but Alex proved last year why he is regarded so highly by NISMO when he adapted almost instantly to our Nissan Altima.

“The Nissan Global Driver Exchange not only further strengthens our ties with Nissan and NISMO globally, it also brings an international profile to the V8 Supercars endurance events.”

Rick Kelly will also have recent ADAC GT Masters victor David Russell in the #15 Altima in a combination which has stretched back for the last five seasons.

The confirmation of Buncombe at Nissan leaves the second Lucas Dumbrell Motorsport seat as the only obvious vacancy ahead of the Sandown 500 in September.

See below for a summary of the Pirtek Enduro Cup field

*driver yet to be confirmed