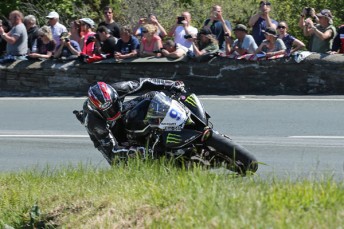 Ian Hutchinson completed a hat-trick of wins at the Isle of Man TT Races, taking victory in the second Supersport race to earn his 11th overall victory at the classic road racing event.

The Englishman finished 14.8-seconds in front of Kiwi Bruce Anstey with the popular Guy Martin taking his first podium of the week.

Over the early stages of the Hutchinson was in a battle with James Hillier, while the likes of the Anstey, Gary Johnson, Martin and Dean Harrison were in the mix.

After dominating last year’s races, Michael Dunlop’s troubled run in 2015 continued with retirement in the pits.

By the second lap Hutchinson stamped his authority on the race as Anstey moved to second, and despite leading early, Hillier was back to third.

At the head of the field though, Hutchinson wasn’t to be denied and despite a charging Anstey, he turned up the wick and came home the winner by an eventual 14.8s. Anstey took his fourth podium of the week in second, with Martin getting third. 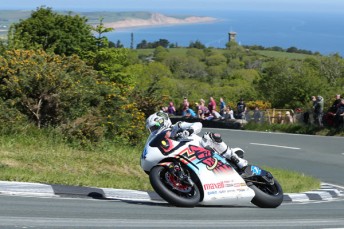 Hillier put in his best ever Supersport ride to take fourth with Gary Johnson and Lee Johnston in fifth and sixth as they had been for much of the race. Conor Cummins got the verdict for seventh by just 0.04s from team-mate John McGuinness with Dan Kneen and David Johnson completing the top ten.

Hutchinson’s win saw him move on to 95 points in the race for the TT Championship, some 23 points clear of Anstey with Hillier holding onto third on 52 points. 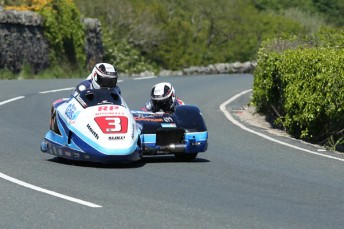 John McGuinness broke his own TT Zero record in the single race for non-emission bikes. He led home teammate Bruce Anstey, also inside the race record.

The two riders pressed each other over the single lap race, with McGuinness winning by four seconds (191.961 km/h) with Lee Johnston taking third. Guy Martin and Robert Wilson completing the top five.

Ben and Tom Birchall took their second win of the 2015 Isle of Man TT Races when they took a record breaking victory in the final Sidecar race Winning in a new race record time, they defeated Dave Molyneux/Ben Binns by seven seconds with John Holden/Dan Sayle coming home in third. Molyneux and Binns had the consolation of claiming a new lap record with a final lap speed of 187.947 km/h.