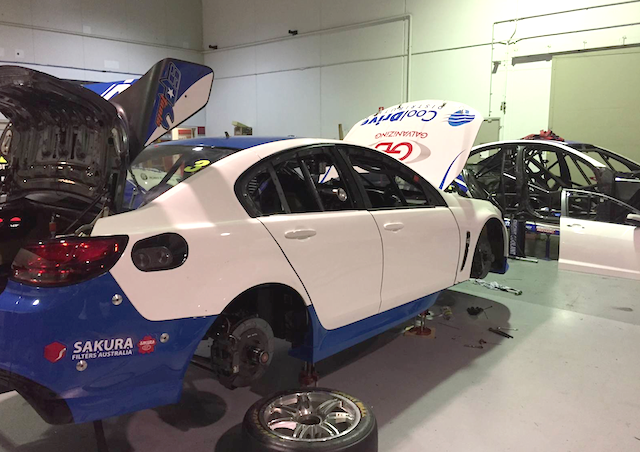 Blanchard has to date been campaigning the car raced by Scott Pye and Russell Ingall over the last two seasons, which endured several heavy hits.

The 27-year-old now moves into the chassis that spent 2013 in the hands of Dean Fiore before sitting out all of last season.

It has undergone extensive repairs since being crashed by Nick Percat at Albert Park in March, which forced the team into buying a third Triple Eight-built car from Tekno Autosports.

“It’s another step forward to have two cars that were built side-by-side that we can compare directly between,” LDM team manager Barry Hay told Speedcafe.com.

“The older car that we were running had a really exciting life and, while we had done a lot of work on it, there was still a bit of difference to the other chassis.

“From Darwin on we can truly operate like a two-car team, which will benefit both drivers.

“The timing is good because we’ve been finding our feet engineering wise over the early part of the season.

“Now we have the basics under control we’re honing in on set-ups and refining the package.”

Blanchard sits 21st in the standings after the season’s first 12 races, six places behind the highly rated Percat.

Hay hopes that lining the two drivers up in equal equipment will help get the best from Blanchard who, like Percat, is a former Australian Formula Ford Champion and Dunlop Series race winner.

“I really think Tim will come on more and more during the year,” said Hay.

“He’s never had real continuity through his (V8 Supercars) career and he’s been in second-string cars most of the way.

“Here he gets the same treatment as Nick which gives him a chance to produce his best.”

Hay meanwhile continues to work on securing a Pirtek Enduro Cup co-driver for Blanchard, confirming that one international and one local driver remain in contention for the season.

Percat and Blanchard both scored their season best results to date during the Sunday race at Barbagallo early last month, finishing eighth and 12th respectively.