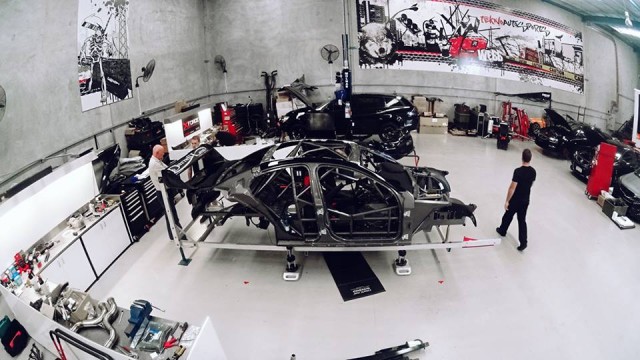 Tekno Autosports will stick with its current suspension package when it rolls out its latest chassis for Shane van Gisbergen this week.

The fresh Tekno Holden will be shaken down at Queensland Raceway on Wednesday sporting the team’s existing ‘Mk 4’ Triple Eight front suspension.

The front suspension is the biggest area of design freedom under the Car of the Future rules, which saw the category move to a control chassis and rear suspension from 2013.

Tekno had been set to upgrade its car’s front-end ahead of this season, before deciding that the money required could be better spent in other areas.

The two versions have subtle geometric differences that are thought to contribute to the contrasting fortunes of the Red Bull and Tekno entries at different circuits.

While there remain doubts over the benefits of the upgrade, Tekno driver Shane van Gisbergen told Speedcafe.com that continuing with the previous generation suspension comes with its challenges.

“I’ve never driven the Mk 5, so I don’t know if there’s any real performance gain,” said Van Gisbergen, who will switch to Red Bull next season.

“(But) there is some set-up stuff that doesn’t work (translate) between them, which makes it tough for us.

“When we struggle we can’t just bolt their (Red Bull’s) set-up on because the car is different, so it’s hard in some ways because we’ve got to go our own way.

“We really are a single car team whereas if we had all the stuff we could just bolt their stuff on and be away. But it really just is what it is.”

Red Bull team manager Mark Dutton told Speedcafe.com earlier this year that the virtues of the Mk 5 continue to be closely analysed against its predecessor.

“You constantly keep looking at it to make sure what you’ve put on was a gain,” he said, noting the close technical alliance between Red Bull and Tekno.

“We’ve won a couple of championships on them (the Mk 5 front uprights), so they’re obviously not terrible, but nothing is perfect for every track.

“It’s hard to say what percentage it plays (in the performance of the Red Bull cars against Tekno).

“But I don’t think we’ve got every other single component right to the point where you can say categorically that the Mk 4 or 5 is the deciding factor.

“The Tekno guys are a great team with a good driver, engineer and team manager, so they should be right up there (regardless of which specification they’re running).”

While the team struggled for consistent speed across the middle stages of last season, Coulthard also downplays the differences between the two generations.

“Darwin last year is where our championship sort of fell away, but I don’t feel like Mk 5 was our area of weakness,” Coulthard, who is also in a fresh chassis for Darwin this year, told Speedcafe.com.

“We had other weaknesses other than that around that time that we feel we have addressed this year.”

Red Bull’s entries have this year been running an adjustment lever, rather than the usual knob, in order to enable their drivers to easily change the bias between corners.

The traditional, less user friendly method sees brake bias changes made only every few laps in order to compensate for the lightening of the fuel load during a stint.