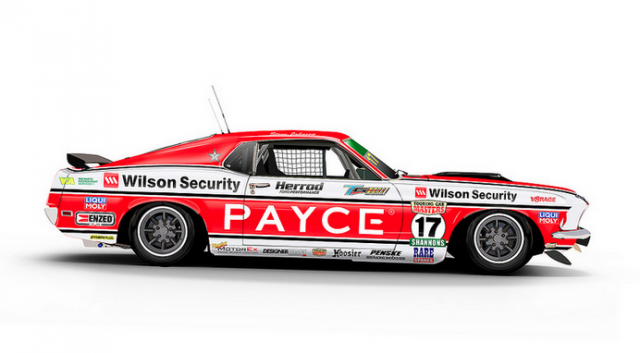 Steven Johnson will return to the wheel of John Bowe’s Ford Mustang at the upcoming Darwin round of the Touring Car Masters.

Johnson’s place in the entry has been confirmed following increased backing from Bowe’s sponsors Payce Consolidated and Wilson Security.

As previously reported, Bowe will continue to drive the Gary O’Brien owned Holden Torana that the V8 Supercars Hall of Famer debuted last time out at Winton.

Bowe subsequently launched a crowd funding campaign to get Johnson aboard the idle Mustang, which the son of Dick Johnson raced earlier this season at Symmons Plains.

The deal has however come together due to the support of a fleet of sponsors, which also include Herrod Ford Performance, WM Waste and Knox Transfer Station.

“It is amazing to pull all of this together,” said Bowe.

“It couldn’t have been done without the incredible support from our loyal sponsors and the incredible fan reaction to the plan to reunite Stevie and I in the same team,” Bowe said.

“We’ve had sponsors who supported DJR back in the day ring us and say ‘yep, we want to be involved!’ which is quite incredible.

“The time I spent with Dick, Steve and that team were amongst the happiest and most successful of my career and they really are family to me.

“When I couldn’t drive ‘Sally’ in Darwin I knew Steve would be the only person I’d put in the car in my place.

“I’ve seen him grow from a young kid hanging around the DJR garages during the Ford Sierra days and turn into a tremendous driver with a great career of his own.

“I don’t think any of us would have thought that nearly 30 years after we first raced together, the Johnson and Bowe families would still be battling it out – but that’s what is going to happen.”

Johnson is racing full-time in the Australian GT Championship this season, but appears set to miss out on a ride in the V8 Supercars endurance races for the first time since 1993.