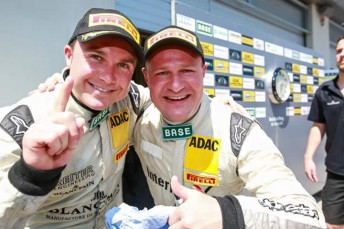 David Russell followed up a maiden ADAC GT Masters win with a second place finish in the final heat at the Red Bull Ring to complete an impressive championship debut.

The 33-year-old Australian, who was called up to join the top German Reiter Engineering outfit last week, produced another solid drive alongside former F1 pilot Tomas Enge to finish second behind the Grasser Racing Lamborghini Huracan of Mirko Bortolotti and Adrian Zaugg.

Russell and Enge’s podium came after a commanding victory on Saturday which saw the pair cruise to the chequered flag.

Despite missing out on a double victory, the duo claimed maximum championship points virtue of the fact the Grasser Racing Huracan was making a guest appearance in the series.

“I’m feeling quite overwhelmed by our weekend and my thanks go to Hans Reiter and the team for their good work,” said Russell.

“Today was a little more difficult than yesterday, but Tomas handed over to me with the car in good shape.

“It’s been a great experience to drive here. I want to compete in more races in Europe, and I hope this weekend will give me the chance.

“Thanks to the team and the competitors – everyone has given me a warm welcome, and the atmosphere has been great.”

Russell will rejoin the Reiter Engineering squad for the third round of the ADAC GT Masters at Belgium’s Spa-Francorchamps circuit on June 19-21.