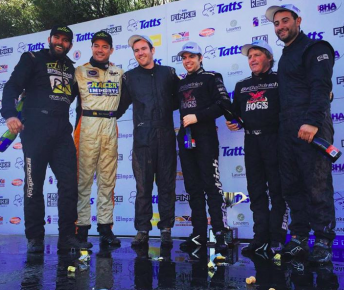 The Finke Desert Race podium. Shannon (third from right) and Ian Rentsch (second from right) have claimed successive titles and the fourth overall after wins in 2005 and 2006

Victorians Shannon and Ian Rentsch have come from behind to claim their fourth Tatts Finke Desert Race title.

The son and father combination guided their #1 JIMCO Buggy Nissan 3500cc machine to victory in 3:42.20s.

The defending champions landed their fourth win in the event, having previously won it in 2005 and 2006.

Overnight leaders Jack Rhodes and David Pullino (#91 JIMCO Aussie Special Nissan 3500cc) were classified second after a puncture at the 110km mark ended their chances in the 452km event.

Rhodes and Pullino covered the distance in 3:49.1s with Beau Robinson and Matt Hanson third in their #3 Geiser Brothers Trophy Truck more than 13 minutes behind.

Robinson was responsible for a solid performance after being classified back in 16th at the prologue. 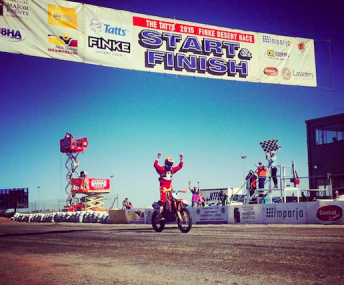 The Alice Springs crew of Chris Coulthard/Robert Hawker in the #88 PRO Jimco 2000 Chev 6000cc finished 10th after making the overnight stop in third.

Price, who finished third in the Dakar Rally earlier this year, completed the journey in 3:52.54s on his KT 500EXC.

Price, who fought an ankle injury, described the win as his toughest after claiming previous Finke triumphs in 2010, 2012 and last year.

“It was by far my toughest victory. Riding injured on both the way down to Finke and on the way back wasn’t easy”, Price said.

David Walsh (#2 Honda CRF450R), who was second at the overnight stop, failed to finish today when he blew an engine 110km from the finish.