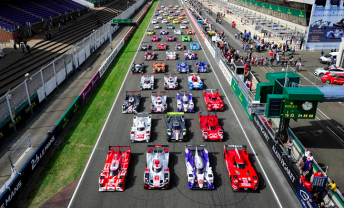 Four factory-backed operations will square off at next weekend’s Le Mans 24 Hour classic.

Since 1923 the battle man and machine has launched against the elements in the French city of Le Mans has transformed into an important commercial tool for car makers.

This year Nissan, after a long absence, has joined incumbents in the top LMP1 class to run against Audi, Porsche and Toyota.

There are a total of 14 cars fighting in the outright prototype category, 11 of which are fielded by the aforementioned manufacturers.

With a record of claiming 13 victories from the last 15 stagings of the twice-around-the-clock epic, Audi has every right to claim favouritism.

Moreover the fifth generation R18 e-tron quattros have outpaced the field in the previous two rounds of the World Endurance Championship leading up to Le Mans.

Porsche holds the record for outright wins at Le Mans with 16 and has soared into calculations as its development program accelerates in the second year of the technically complex 919 Hybrids.

The #17 Porsche is highly fancied to launch a serious assault with German Timo Bernhard, Australian Mark Webber and Kiwi Brendon Hartley at the wheel.

Hartley was in sizzling form at the official test at the La Sarthe circuit just over a week ago, setting the quickest time in variable conditions.

The race has been a bogey for Toyota which saw it defeated with the striking GT-One machines in 1999, a car which had been labelled unbeatable on form and pace.

The Japanese maker finds itself on the back-foot but is by no means out of the hunt.

Nissan is plunging into the deep end with Le Mans, the biggest sports car race in the world, standing as the debut for its trio of GT-R LM NISMOs.

Operating in the lowest energy class, the Nissan is arguably the bravest prototype design seen at Le Mans being front-wheel-drive and front-engined.

With weather an ever-present variable at La Sarthe, the question of who will win at the 13.6km circuit is far from cut and dry.

Which manufacturer will win Le Mans in 2015? Vote now on this week’s Pirtek Poll.