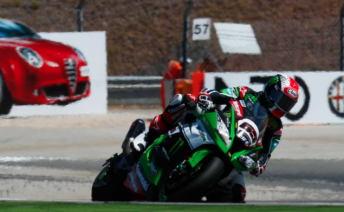 Jonathan Rea on his way to victory at Prtimao

Jonathan Rea continued his relentless charge towards a maiden World Superbike Championship crown by scoring his fourth double victory of the season at Portimao.

The Northern Irish rider overcame a battle with Kawasaki team-mate Tom Sykes in tricky damp conditions to take the spoils in Race 1, before seeing off Davide Giugliano in the final encounter of the weekend.

Rea’s performance has set a new benchmark with his 10th win from 14 races marking the best start to a season in the championship’s history.

The championship leader went head-to-head with Sykes in the opening heat before a late rain shower intervened with six laps remaining.

The entire field pitted for wet tyres which resulted in Rea and Sykes resuming their battle for the lead on a damp track.

In the end, it was a mistake from Sykes in the closing laps which decided the race in Rea’s favour.

Sykes managed to come home in second ahead of Aruba Ducati rider Chaz Davies, who claimed the final place on the podium.

Rea was forced to work a little harder for his triumph in Race 2 with the Kawasaki rider locked in a battle involving Giugliano and Sykes in the early stages.

However, Rea’s pace proved too much for his rivals as he leapt into the lead by the halfway mark, courtesy of a slick move on Giugliano on the run into Turn 1.

Once in front, he surged into the distance to score his 10th win of the season with a comfortable 5.4s margin over the Ducati rider.

A mechanical issue saw Sykes drop to eighth at the flag allowing Haslam to finish third ahead of Davies and Pata Honda’s Muchael van der Mark.

Rea has opened up a 124 point championship lead heading into round eight at Misano on June 21.