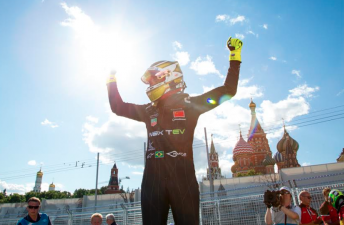 Nelson Piquet Jr put himself in the box seat to claim the inaugural FIA Formula E title following a commanding victory on the streets of Moscow.

The Brazilian capitalised on a slow start from polesitter Jean-Eric Vergne to move into the lead which he retained until the chequered flag.

Once in front, the China Racing driver gapped the chasing pack with his lead extending to 15 seconds, before he began to conserve his battery power in the closing stages of the race.

The victory moved Piquet Jr into a 17 point at the top of the championship standings heading into the London double header finale on June 27.

“We know that we cannot afford to make any stupid mistakes and we will have to work as well as we have done so far, when it comes to the double-header in Battersea.

“We have always gone well in qualifying and I demonstrated that I had a good race pace, with the exception of Berlin, but here we ran as strongly as we had done in the previous ePrix.”

Lucas di Grassi came through to finish second having managed to jump Vergne in the pit stops, while e.dams’ Sebastien Buemi finished third on the road.

Vergne had held third position at the start of the final lap but was passed by both Buemi and Venturi’s Nick Heidfeld.

However, a post race penalty issued for an unsafe pit release saw Buemi stripped of his podium.

The Swiss driver was demoted to ninth once 29 seconds were added to his race time.

As a result of the penalty, Vergne finished fourth ahead of Daniel Abt, and the Amlin Aguri pair of Salvador Duran and Antonio Felix da Costa.