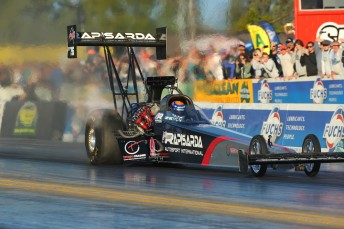 The two-time NHRA US Nationals champion defeated team-mate Wayne Newby with a 6.645 second pass at 141.59mph.

It was only the American’s second appearance at the event, having first appeared in 2011, the same year in which he went on to win at the Australian Nationals.

While McClenathan took the spoils, Rapisarda team-mate Damien Harris, who was defeated by the Winternationals winner in the semi-finals, secured the 2015 Top Fuel Championship.

Away from the track, Mildura Top Fuel racer Phil Lamattina remains in hospital in a stable condition after sustaining a shattered vertebrae following a severe crash on Saturday.

On his return to drag racing a year on since his near career ending accident at the 2014 Winternationals, Ben Bray looked set to go out in the semi-finals after he red lit in his father’s 1957 Chevrolet Top Doorslammer.

However his competitor, Paul Cannuli, had his time disallowed after crossing the centre line.

This set up a final match up between Bray and John Zappia, who had reset the national elapsed time record for Top Doorslammer at the event.

Zappia went on to better the record even further in the final, defeating Bray with a 5.693 second pass at at 250.97mph.

Despite the final loss, it was Bektash who secured the Pro Stock Championship.

After an accident in Friday’s qualifying session ruled Gary Phillips out of the event, the 17-time national champion was forced to watch the Top Alcohol eliminations from the grandstands.

Although, the defeat of John Cannuli by Jamie Noonan in the semi-finals was enough for Phillips to secure the title.

Noonan went on to take Top Alcohol victory defeating Steven Reed in the final with a 5.522 second pass at 260.97mph.

In Top Bike, Mark Drew, who secured the championship earlier in the event, defeated Darian Guillory with a 6.447 second pass at 195.42mph.