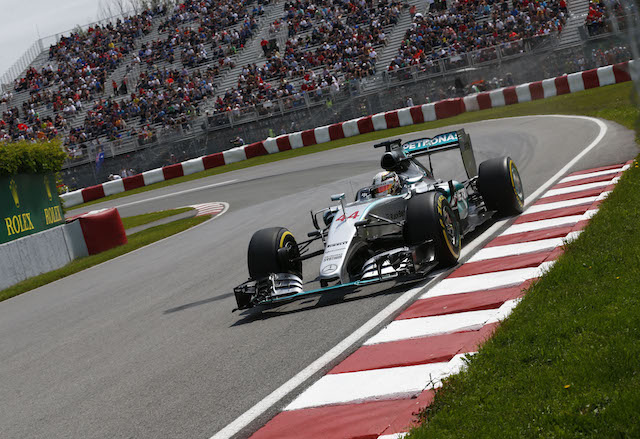 Lewis Hamilton proved untouchable in qualifying as he stormed to pole position for the Canadian Grand Prix.

The Mercedes driver dominated at the Circuit Gilles Villeneuve to claim his 44th career pole position with a comfortable 0.309s margin over his nearest rival and team-mate Nico Rosberg.

Hamilton banked a 1:14.393s effort on his first run in Q3 which stood at the chequered flag as Rosberg, battling with a lack of rear grip, struggled to match the reigning world champion.

Ferrari’s Kimi Raikkonen emerged as the best of the rest in third although the strong showing from the Finn left him 0.6s adrift of Hamilton.

However, his four-time world champion team-mate Sebastian Vettel endured one of the most difficult sessions of his career after a MGU-K issue on his upgraded Ferrari power unit prevented him progressing from Q1.

The German cut a frustrated figure after receiving the news he will start from 15th on the grid.

Valtteri Bottas will join his fellow countryman on row two in what proved to be a mixed day for Williams as engine issues saw Felipe Massa miss the cut in Q1, leaving the Brazilian to start Sunday’s race from 16th position.

Meanwhile, Lotus produced its best qualifying session of the season with Romain Grosjean and Pastor Maldonado set to share the third row in fifth and sixth.

Nico Hulkenberg was seventh fastest for Force India ahead of the Red Bull Racing duo of Daniil Kvyat and Daniel Ricciardo, with the latter completing just one run in Q3.

The sister Force India of Sergio Perez rounded out the top 10 ahead of the Toro Rosso of Carlos Sainz.

Sainz’s team-mate Max Verstappen was 12th fastest but will be forced to start the Canadian Grand Prix from the rear of the field, courtesy of a 15 place grid penalty.

The 17-year-old has been issued with a 10 place grid penalty for a change to a fifth Renault power unit, on top of the five place grid drop received for his crash in the Monaco Grand Prix.

The Saubers of Felipe Nasr and Marcus Ericsson were also victims of Q2 with the pair due to start from 12th and 14th positions respectively.

It proved to be another difficult day for McLaren with Fernando Alonso guiding his upgraded MP4-30 to 13th, while his opposite number Jenson Button was forced to sit out qualifying completely following an ERS failure.