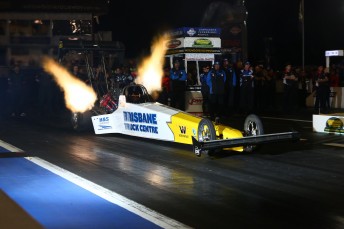 The Englishman made the most of the conditions to clock a 4.755s pass at 306.1mph (492.6km/h) in the third qualifying session for the category at the Ipswich venue.

His run followed a shocking high speed crash for Phil Lamattina in the afternoon’s earlier session which saw the Victorian transferred to a nearby hospital, where it was confirmed he sustained a shattered vertebrae.

“To say I was under pressure was a bit of an understatement,” said Read.

“We didn’t come out last night because it was that cold there was no point, we haven’t got enough parts to waste on a cold track like that.

“We knew with Lamattina’s accident we’d be out later still tonight but it didn’t get as cold as last night.

“We started up, I let my foot off the clutch and nothing happened. I revved it up and the car started to move so I thought at least it will move and do something.

“When I backed up it was tugging on the motor and I thought this won’t be too bad. And it just fell down the track.”

A year on from his near career ending crash at Willowbank Raceway, Ben Bray produced an impressive effort by setting a new benchmark for his father’s 1957 Chevrolet Top Doorslammer.

“When I was second quickest on Friday with a 5.973, the old boy was quick to tell me that he still had gone quicker than me – but today I got it done,” said Bray.

“The atmosphere and the reception we have been getting here this weekend from the fans has just been phenomenal, I can’t wait for race day.”